Marshall’s FG with no time lifts Fairland over N-Y, 30-28 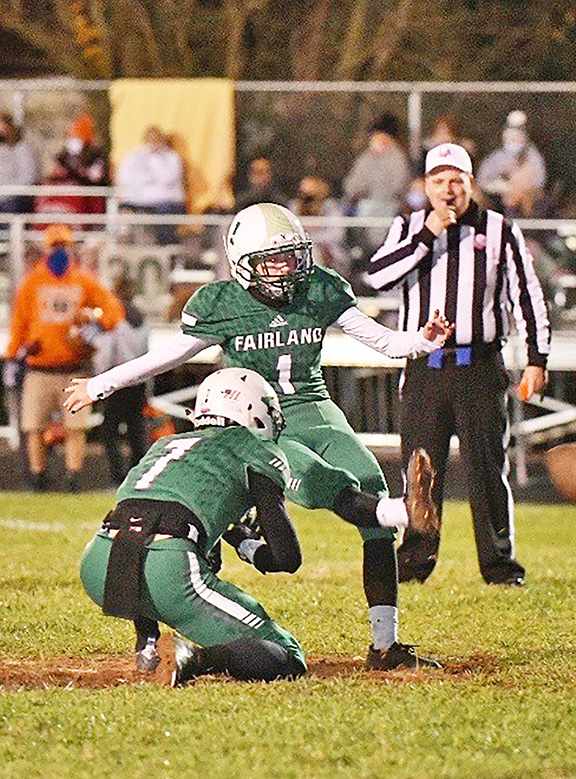 Fairland Dragons’ Emma Marshall (1) kicked a 27-yard field goal on an untimed down to end the game and give Fairland a 30-28 win over the Nelsonville-York Buckeyes in the Division 6 Region 23 playoffs Saturday night. (Tony Shotsky of SouthernOhioSportsPhotos.com)

PROCTORVILLE — The Dragons were able to stay in the ‘Hunt’ for a state title in the Division VI, region 23 Ohio state playoffs thanks to Gavin, Gavin Hunt.
The senior wide receiver did, however, need the MVP to close it out as Emma Marshall kicked a 27 yard field goal with an untimed down to top the Buckeyes from Nelsonville-York, 30-28.
Fairland started the game hot with a 61 yard touchdown pass from Max Ward to Gavin Hunt on the third play of the game to take an early 7-0 lead after the Emma Marshall point after kick.
Both teams exchanged three and outs on each of their next possessions, but the Dragons would find the endzone one more time in the first quarter when they capped a 14-play drive with another touchdown pass from Max Ward to Zander Schmidt from 5 yards out.
Nelsonville-York wouldn’t get their first, first down until the second quarter, but found the endzone shortly after. The Buckeyes scored on their first possession of the second quarter with a 37 yard touchdown when Drew Carter found Alec Taylor down the middle of the field on a play-action pass. Taylor would kick the point after as well to make the score 14-7.
After a few change of possessions, Gavin Hunt found himself in the endzone yet again when he returned a Nelsonville punt for a 73 yard touchdown with 5:00 minutes remaining in the half. Gavin then intercepted Drew Carter on their next possession to end the half and give the Dragons a halftime lead, 21-7.
Hunt had a big night as he finished with 7 catches for 205 yards and 1 receiving touchdown. He also tallied up over 100 yards on kick/punt/interception returns and scored 1 touchdown via special teams.
Nelsonville-York would answer out of the break with a 9 play drive that would result in a touchdown on a QB sneak by Drew Carter. This would cut the lead and make it a one score game, 21-14.
Fairland would answer with another touchdown pass from Max Ward to Zander Schmidt for their second connection of the night.
This is when things got rocky for the Dragons as Emma Marshall missed the point after kick to make it a 27-14 ball game. Fairland also racked up 35 yards of penalties in the third quarter and the Buckeyes took advantage of the momentum.
Drew Carter snuck it in again for a 1 yard touchdown at the beginning of the fourth quarter and would bring the game within a touchdown, 27-21 with 8:22 remaining in the game.
The Fairland Dragons would get the ball back with a chance to extend the lead or run some clock, but head coach Melvin Cunningham was worried.
“Offensively we just stumbled in the second half and we didn’t have an answer for the QB power. We couldn’t get the run game going and the conditions were a factor for both teams.”
Although Fairland was able to put a drive together and pick up four first downs, they couldn’t put points on the board and gave Nelsonville-York the ball back with just over 2 minutes remaining on their own 32 yard line.
Drew Carter would pick up 31 yards on the first play of the possession and take it down to the Dragon 39 yard line. Six plays later on 4th down with 27 seconds remaining, Carter hit Taylor down the middle of the field for a touchdown to tie the game at 27.
Alec Taylor also kicked Point after kicks for the Buckeyes and he drilled it to give them a
1 point lead with under 30 seconds.
Nelsonville-York then elected to kick it off to the dangerous Gavin Hunt who returned it to
their own 44 yard line. Hunt caught a pass the next play from Ward for a gain of 24 yards and
the ball was spotted at the Nelsonville-York 20 yard line with just over 15 seconds remaining.
Max Ward would try 3 passing attempts to the end zone, targeting Hunt all 3 times but to
no avail. His final pass was intercepted, but called back on a passing interference call as time expired.
This gave the Dragons one untimed down half the distance from the goal which put them on the 10 yard line.
Coach Cunningham was then forced with a decision to put in the only girl in the football game, Emma Marshall, who had just missed her last point after kick.
“I told Emma earlier this week that there was going to be a time that this team is going to need you and it’s going to be this week,” Cunningham said after the game.
Coach was spot on and he would need her to make a 27 yard field goal to win the game.
“I told Khalil (Fairland assistant coach) oh no, oh no,” said Emma when the moment came for her to hit the field and try for a game winning field goal.
Marshall would go on to split the uprights and win the game as the Dragons advance to the round of 16 for the first time in school history.
Coach Cunningham gave praise to God after the win, and said, “let me tell you how amazing God is, he will put the ball where you practice it from all the time and Emma was ready for the moment because she practices it everyday. I knew she was going to make it, but we came into this game knowing we would praise God no matter the outcome.”
Emma Marshall’s kick will go down as the kick that made history for Fairland, and who would have thought the final play would include a freshman long snapper (Peyton Jackson) and a girl to settle the Dragons fate.
Fairland will face Coal Grove next Saturday at Jim Mayo Memorial Stadium, a fellow member of the Ohio Valley Conference who the Dragons edged early this season, 27-21.