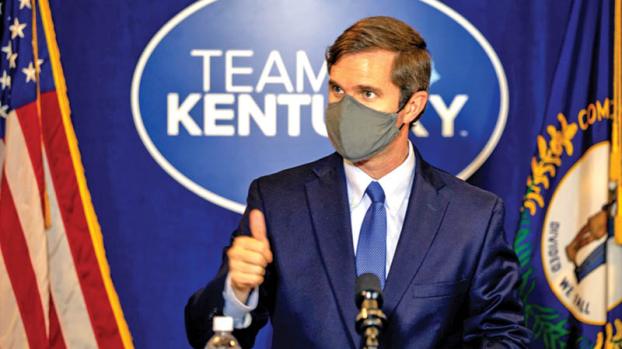 FRANKFORT, Ky. (AP) — Kentucky Gov. Andy Beshear left quarantine on Saturday, two weeks after being exposed to COVID-19 by a member of his security detail.

“As of today I am officially out of quarantine after following the advice of the department for public health,” Beshear wrote on Facebook Saturday morning. “We have tested negative for COVID-19 multiple times, which I contribute to the fact we were wearing masks at the time of contact. Thank you to all who have sent supportive messages. We are very blessed.”

Beshear’s wife, Britainy, and their two children also consistently tested negative while in quarantine at the governor’s mansion.

Beshear said Thursday that his security sidekick still has some symptoms but is “going to be OK.”

The Democratic governor has promised stricter enforcement of his statewide mask mandate but has urged Kentuckians to take the initiative to wear facial coverings and follow other health guidelines.

Meanwhile, Kentucky’s Republican state treasurer has been urging lawmakers to put restrictions on the Democratic governor’s ability to take executive action in an emergency, criticizing Beshear’s use of taxpayer funds to enforce his springtime restrictions on public gatherings such as religious services. The leader of the GOP-controlled Senate has said legislators are likely to review those broad gubernatorial powers when they convene next year.

For most people, the coronavirus causes mild or moderate symptoms that clear up within weeks. But for others, especially older adults and people with existing health problems, the virus can cause severe symptoms and be fatal. The vast majority of people recover.

Lawrence County hit a sad record this weekend when the number of positive COVID-19 cases reached over 1,000 on Saturday.... read more