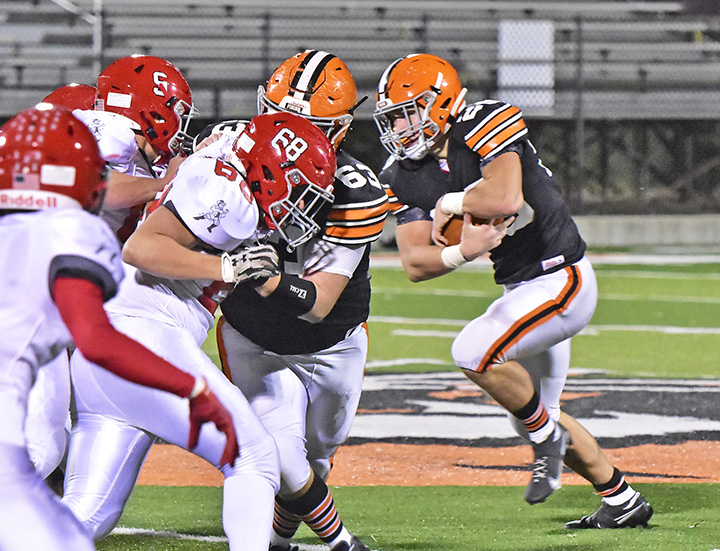 It’ll be the run vs. the run.
When the World Harvest Prep Warriors visit the Ironton Fighting Tigers in the Division 5 Region 19 semifinals on Saturday night, it’ll be running game versus running game.
The game will match 1,000-yard rushers in Prep’s junior running back Jaylen Jennings (5-9, 170) and Ironton’s senior Reid Carrico (6-3, 235).
Jennings has 154 carries for 1,585 yards with 21 touchdowns while Carrico has 1,170 yards on just 93 carries with 20 touchdowns.
Warriors’ sophomore quarterback Aidan Rogers (6-1, 188) is second on the team with 262 yards on 50 carries and three TDs. As a team, they have 2,472 yards on 286 attempts.
Ironton sophomore Trevor Carter (6-1, 190) has 419 yards on 44 attempts and he’s scored five touchdowns. Senior fullback Cameron Deere has 27 carries for 157 yards and three scores.
While the teams rely heavily on the run, they are not void of the passing game.
Rogers is 40-of-69 for 691 yards with four touchdowns and three interceptions.
His top receivers are Shaun Goins with 20 catches for 385 yards and four TDs, Jalen Davis with 12 receptions for 235 yards and Manny Mullens eight grabs for 49 yards with two scores and three conversion catches.
Ironton sophomore Tayden Carpenter (5-11, 175) has had an impressive season in his rookie year. Carpenter is 62-of-99 for 1,097 yards with 18 touchdowns and just three interceptions.
Senior Trent Hacker leads a balanced corps of Ironton receivers with 13 receptions for 322 yards and four touchdowns. Aaron Masters has catches for 226 yards and three TDs while Carrico has seven receptions for 112 yards and a score.
Ironton comes into the game 8-0 and ranked second in the Associated Press football poll. The Warriors are 7-1 and riding a six-game winning streak dating back to a 20-10 loss to Columbus Academy in the second game of the season.
But Harvest Prep avenged that loss last week with a 20-17 win over the Vikings. Ironton — the region’s top seed — dominated Johnstown-Monroe 42-0 to advance.
In the turnover department, the Warriors have been intercepted three times and lost 13 fumbles — four against Columbus Academy.
The Warriors are 30 of 65 on third down conversions and 6 of 15 on fourth down conversions.

ARLINGTON, Texas (AP) — No dogpile, no champagne and a mask on nearly every face — the Los Angeles Dodgers... read more