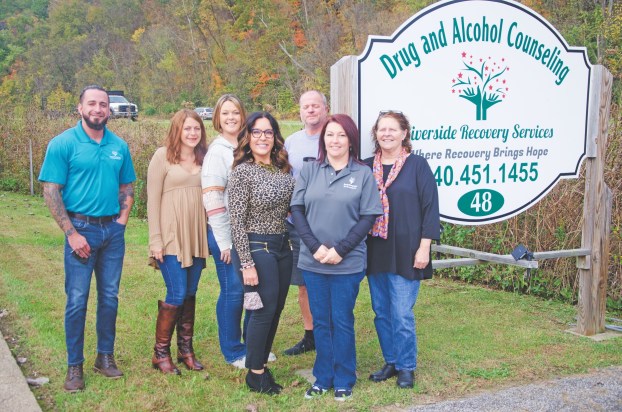 ABOVE: Riverside Recovery Service’s outpatient office is located in South Point. The business, which marks five years in operation this month, was named Best Substance Abuse facility by readers of The Ironton Tribune. BELOW: One of the bedrooms, with accommodations for three people, is seen at Riverside Recovery Services’ men’s sober living house on Riverside Drive in Chesapeake. (The Ironton Tribune | Heath Harrison)

SOUTH POINT — Riverside Recovery Services launched in October 2015 and, in the five years since, the recovery group has expanded to multiple facilities and locations and has become a key player in the county’s efforts to battle the addiction epidemic.

The company has administrative offices in Chesapeake, an outpatient office in South Point, a men’s sober living home in Chesapeake,  two women’s homes on Buffalo Creek and Solida Road,  a men’s facility on Big Branch and a larger treatment facility for men on Big Branch.

“It grew faster than anyone expected,” Andie Leffingwell, human resources coordinator for Riverside, said. “We thought we would have three houses by this point. The demand is huge.”

Riverside was founded in 2015 by Amy Smart, a Knox County native, along with Travis Owens. Smart is herself a recovering addict. Smart served time in prison as a result of her addiction and established the company following her release and recovery.

“She wanted to build a program out of her experience — what worked for her, with a focus on living in recovery and the skills needed,” Leffingwell, said.

Smart recently described to The Ironton Tribune her experience with a program called Tapestry.

Smart said, while in Tapestry, she began journaling about and creating plans for an agency she someday I wanted to open.

“I wanted to help others and give them the second chance that I myself was given,” she said. “Eventually in 2015, that dream became a reality. My business partner Travis Owens and myself opened and gained licensure through the Ohio Department of Mental Health and Addiction Services. “

Leffingwell said their program is client-focused and based on individual needs.

For instance, clients at the men’s sober living home in Chesapeake, which houses about 15 people, first go through a detox program before entering the home, which is staffed at all times.

Upon arriving, they are given an assessment and a treatment plan and are assigned a counselor and a group therapy schedule. Groups meet throughout the week.

Clients usually stay for about nine to 10 months, and then go into job placement programs.

Riverside said they have seen many successes with people returning to everyday life after going through their program.

The company has kept the celebration of their five-year anniversary low key, with the COVID-19 pandemic limiting any possible events. However, they were voted Best Substance Abuse Facility, as a result of their efforts and impact, by readers of The Ironton Tribune this year.

Leffingwell said they are thankful for their success and the company’s expansion in such a short time.

“We are just excited to be able to help more people,” she said.