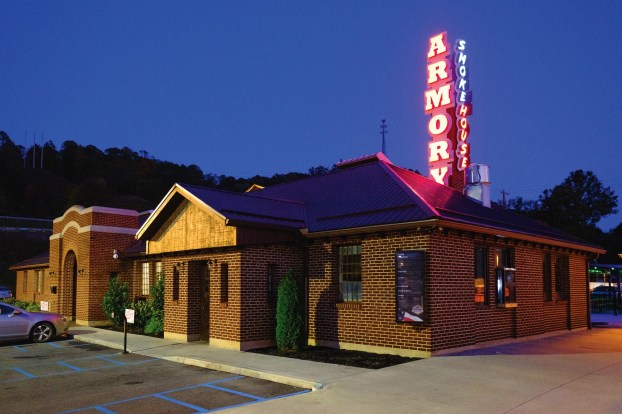 BEST OF 2020: The Armory smokes the competition

“I’m blown away and we’re blessed to have the support,” Chuck O’Neill, general manager of The Armory Smokehouse in Ironton said of the reception they have received from the community since the restaurant opened in July 2019.

Co-owners Jerry Rowe and Joe Isaac launched the business, with a hope to create an atmosphere that honors those who served in the military.
“One of them is a veteran and the other has a father who is a veteran,” O’Neill said. “There’s so much division in this country, but that’s one thing we can all get behind.”

He said the building is decorated with photos and uniforms of military personnel, donated by families.

“There’s case after case,” O’Neill said. “It kind of turns it into a museum.”

He said, in addition to the displays, veterans and military personnel always get 10 percent off their meals.

“And we do something special for Veterans Day,” he said.

He said, since they opened, the menu has expanded.

“It started at a Bar-B-Q steakhouse,” he said, noting that they have since added seafood, pastas and are planning for deep-dish pizzas in the near future.

The business, located on Vernon Street, has approximately 50 employees and O’Neill said they also do catering.

“Small groups, all the way to large wedding parties and corporate events,” he said.

He said, like all other restaurants in the nation, COVID-19 has had a tremendous impact on the Armory this year.

“It hit us drastically,” he said, estimating business is down 30 to 35 percent, but he said they are working to adapt.

Their seating area has been adapted for social distancing, while they have expanded their outdoor patio.

“We’re providing appropriate spacing and doing everything we can,” he said. “All employees are wearing masks. We’re deep cleaning and doing things like disposable menus.”

He said they also work to partner with the community, hosting charity events and other efforts.

“We’re working with the Catholic Community so they won’t have to cancel their annual turkey dinner,” he said.

As for the future, he said Armory’s owners are hoping to expand their catering and open additional locations, due to the success of their Ironton restaurant.

That’s eventually the goal,” O’Neill said, adding he thinks the theme of honoring veterans will appeal to other small towns.

O’Neill said the restaurant has proved popular and has more than 13,000 fans on its Facebook page, where contests get high participation.

“It’s been tremendous,” he said.

SOUTH POINT — Riverside Recovery Services launched in October 2015 and, in the five years since, the recovery group has... read more