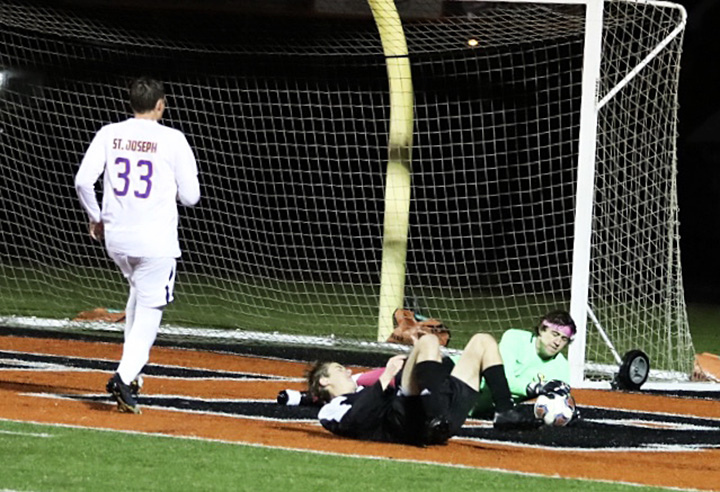 St. Joseph Flyers’ goalkeeper Jimmy Mahlmeister (green shirt) stops a scoring attempt by Lynchburg-Clay during the Division 3 district finals on Thursday. The Flyers lost a heartbreaker in a shootout, 3-2. (Photo By Tim Gearhart)

WAVERLY — There was plenty of fight in the St. Joseph Flyers and there wasn’t any quit.
But in the end, there wasn’t the reward they wanted for such a valiant effort and outstanding performance.
The Flyers rallied from a 2-0 deficit with less than 11 minutes to play in regulation to tie the game and then played two scoreless overtime periods.
Lynchburg-Clay then hit a penalty kick in the shootout that gave the Mustangs a 3-2 win and the Division 3 district soccer championship for the second straight season.
Trailing 2-0 with less than 11 minutes to play in regulation, the Flyers rallied to tie the game on a goal by Zachary Johnson with 10:35 to play and then they made the tying goal by Johnson with just 4:35 left.
After two overtime periods and no scoring, the game went to a shootout.
In the shootout, the Mustangs were able to connect on a penalty kick while stopping the Flyers and escaping with the win.
St. Joseph finished the season 17-1-1 and allowed seven goals — just five goals until the district finals. It marked only the Flyers second unbeaten regular season — they were 13-0-3 in 1999 — and set a record for most wins in a season. The 1999 team won the program’s first sectional title.
St. Joseph 0 2 0 0 0 = 2
Lynchburg 2 0 0 0 1 = 3

RENTON, Wash. (AP) — Carlos Dunlap made it clear he wanted out of Cincinnati and got his wish. The Seattle... read more