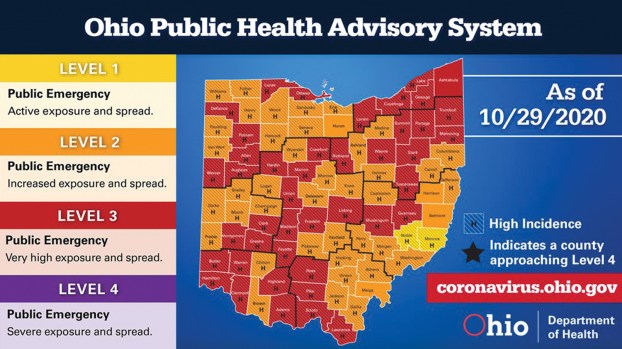 COLUMBUS — There was no ease in the COVID-19 pandemic at either the state or local level this week.

Lawrence County is at Red Level Three for the fourth week on the state’s newest alert map, released on Thursday, while four more counties moved into that designation.

Like most in the state, Lawrence County also continues to have an “H” ranking for a high incidence of the virus, as do neighboring Scioto, Gallia and Jackson counties.

Scioto remains at Level Three, while Gallia and Jackson were unchanged at Level Two on Orange on the four-tier system.

Lawrence and Scioto counties are in their second stint at Level Three, having previously reached that designation in the summer before being downgraded in severity.

He did note that the counties that were marked as potentially approaching Purple Level Four, the highest on the system, were no longer on the watch list. No counties have reached the Level Four designation since the system was implemented in the summer.

“In our new Health Advisory System map, the good news is that we have no purple or watch-list counties,” DeWine said. “The bad news is the virus is spreading significantly throughout this state.”

DeWine said a significant amount of the spread is coming from family get-togethers and small events, but warned that all should remain cautious.

“I’m not saying there is no spread in workplaces, schools, bars, etcetera,” DeWine said. “What I am saying is that a big part of the spread — according to those dealing with it every day — is coming from informal gatherings.”

The governor said the state hit a record number of new daily cases on Thursday, with 3,590 cases reported.

“It’s the first time we’ve surpassed 3,000 cases — and 25 percent more than Saturday’s previous record high,” he said.
DeWine said case numbers continue to go up, as is health care utilization, as an expected second wave of the virus is predicted for the winter months.

“This is concerning,” he said. This is not good.”

DeWine urged the public to continue to wear masks, social distance and practice good hygiene and hand washing and make sure indoor spaces are well ventilated.

“The virus is raging throughout Ohio,” DeWine said. “There is no place to hide. All of us must come together to fight this enemy. We must fight this invader.”

Pipe cracked after inmate flushed uniform A collapsed sewer line at the Lawrence County Jail has been fixed after it... read more