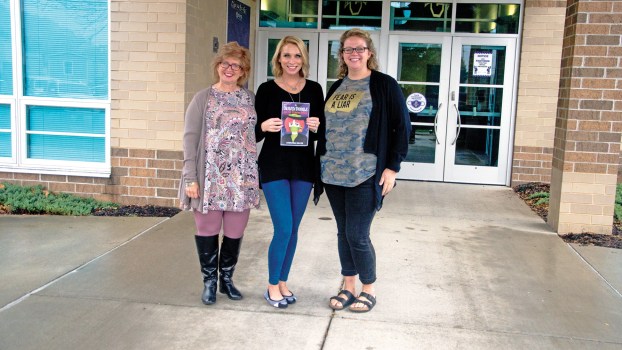 Amanda Davis, center, with fellow Chesapeake Elementary School third grade teachers Becki McClelland, left, and Jamie Saunders, right. Davis is the author of “Draven Doogle and the Corona Witch,” which she began as a short story for Saunders to read during a hospital stay in March. (The Ironton Tribune | Heath Harrison) 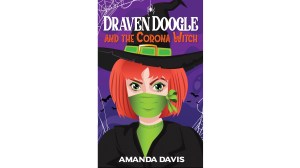 CHESAPEAKE — When Chesapeake Elementary School third grade teacher Becki McClelland had to go into the hospital in March for brain surgery, the COVID-19 pandemic had led to limits on visitors in hospitals.

In order to boost her spirits before she was admitted, her fellow teacher Amanda Davis dropped off a special package on her porch, as schools were closed.

“She wrote me a story as a great, feel-good pick-me-up,” McClelland said.

The story, “Draven Doogle and the Corona Witch,” centers around student Draven Doogle who is convinced he lives across the street from a witch.

“Doogle has seen some pretty weird things happening by his neighbor Mrs. McBecky who is also a teacher at his school,” McClelland said. “He spends the whole book avoiding her at all cost, until a brush with the coronavirus leads him to initiate a face to face meeting with her.”

The book is based on McClelland and another teacher, Jamie Saunders. In the book, the title character is placed in the classroom of Saunders, who is “the coolest teacher in the school.”

The character of McBecky is based on McClelland, who Davis describes as a “wacky teacher who is always doing crazy things.”

“The kids all adore her,” she said.

The three have taught third grade together for five years.

“I wanted to give her something to read in the hospital, because I knew she would be alone and having a scary thing happening,” Davis said of the gift to McClelland. “Something lighthearted to read.”

They called her hospital visit “Good-bye-to Tom,” referring to the name she had given her benign brain tumor, which was removed.

Davis also pointed out that, prior to her surgery, McClelland was spending her days sewing hundreds of masks for the COVID-19 pandemic to give to the public, leaving them in a box on her front porch. And, only days after being released from the hospital, she was back to sewing. 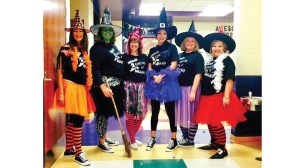 Amanda Davis, right of center, is seen in this 2014 photo with fellow Chesapeake Elementary School teachers. She is the author of “Draven Doogle and the Corona Witch.” (Submitted photo)

“The community needed it and she stepped up,” she said of her friend, who she said deserved to be a character in a book.

Following McClelland’s recovery and return to school, Davis was convinced by her two fellow teachers to expand the story into a chapter book, for which she put together the illustrations.

It is now available on Google Books and Google Play, Barnes and Noble Digital, Amazon and in public libraries, in both digital and physical form.

As for McClelland’s reaction on being turned into a witch for the story, she said, “It was such an honor!”

“It’s the neatest thing that has ever happened to me.,” she said. It is such a cool book. I was so entertained.”

— More information on the book can be found at bublish.com/author/amandadavis.

Lawrence County remains at Level 3 for fourth week COLUMBUS — There was no ease in the COVID-19 pandemic at... read more