Defense propels Ironton past Warriors and onto regional title game 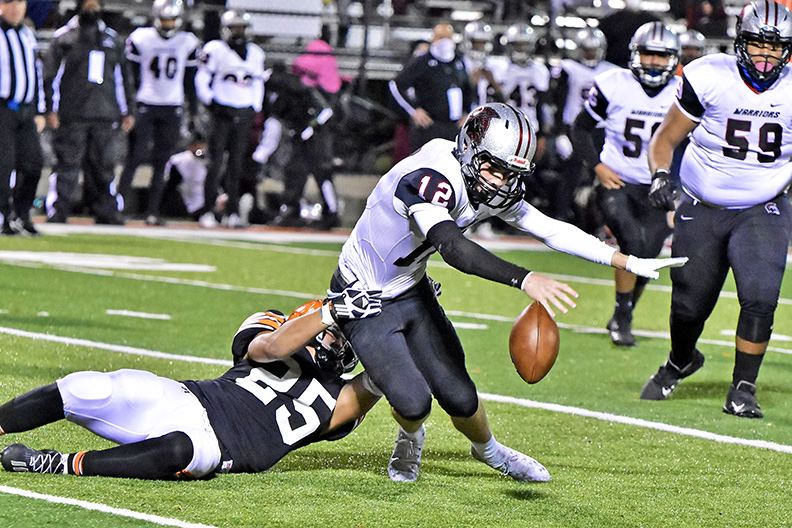 IRONTON — The Ironton Fighting Tigers faced a very good Harvest Prep Warriors’ defense.
The Harvest Prep Warriors faced an even better Ironton Fighting Tigers’ defense.
A pair of hard-hitting defenses were on display for Saturday’s Division 5 Region 19 semifinal game as Ironton generated enough offense to beat the Warriors 21-14.
“The defense stepped up. They say that defense wins championships and we did tonight,” said Ironton coach Trevon Pendleton.
“We didn’t play great. We had too many turnovers. That’s not the way we want to play.”
Ironton lost three fumbles, had an interception and was penalized seven times for 81 yards. Harvest Prep lost three of its four fumbles, was intercepted twice and was penalized five times for 35 yards which could have been worse since three were only half the distance penalties totaling 10 yards.
Ironton — now 9-0 — will host West Lafayette Ridgewood next Saturday in the regional finals. The two teams met in the regional championship game last season with Ironton winning 24-14.
The game will be at 7 p.m. at Tanks Memorial Stadium. The winner advances to the state semifinals at a neutral site to be determined.
Ridgewood (9-0) beat Wheelersburg 13-10 despite reports that starting quarterback Gabe Tingle was injured in the game and played sparingly in the second half.
Ironton’s defense limited the Warriors to just 45 net yards rushing including a mere 3 yards in the second half. Harvest Prep quarterback Adian Rogers was 9-of-18 passing for 105 yards and a touchdown but was intercepted twice.
The Fighting Tigers struggled with their passing game for the first time this season as Harvest Prep was able to get pressure on quarterback Tayden Carpenter who still hit 5-of-10 passes for 60 yards with an interception.
He also ran eight times for 57 yards and scored what proved to be the decisive touchdown.
Ironton’s Reid Carrico led all rushers as he had 106 yards on 25 carries and two touchdowns. Trevor Carter added 64 yards on 11 carries as Ironton rushed for 233 yards on 45 carries. The Fighting Tigers had 298 total yards.
Harvest Prep (7-2) fumbled on the opening kickoff and Ironton recovered at the 23 but failed to convert as Jimmy Mahlmeister was wide right on a 40-yard field goal attempt.
On the ensuing series, Ironton’s Uriah Meadows came up with an interception on second down and returned the ball to the 9-yard line. Three plays later Reid Carrico ran 3 yards for the touchdown and Mahlmeister’s kick made it 7-0 at the 8:16 mark.
Harvest Prep came right back with a 63-yard, 7-play drive capped by Jaylen Jennings 29-yard touchdown run to tie the game with 4:33 left in the quarter.
The Warriors got an interception by Neiko St. Clair at the Ironton 28. But three plays netted only 4 yards and on fourth down, Ironton defensive lineman Nate Cochran sacked Rogers for an 8-yard loss.
The Fighting Tigers then used a 25-yard run by Carter to help get to the Warriors’ 17 only to fumble the ball away.
After an exchange of punts, Harvest Preps had the ball at its own 32 only to fumble and Cameron Deere returned the ball to the 2-yard line. Carrico scored on the next play for a 14-7 lead with 1:55 left in the half.
Trent Hacker recovered a Warriors’ fumble and Ironton drove to the 14-yard line only to have the drive stall at the 12.
Backed up to the 2-yard line, the Warriors punted and an 8-yard return by Kyle Howell put the ball at the Harvest Prep 27.
On the ensuing play, quarterback Tayden Carpenter kept the ball on an option and ran 27 yards to make it 21-7.
“That’s a designed play and Tayden made the right read,” said Pendleton.
Ironton lost its third fumble of the game after a 17-yard completed pass and Harvest Prep had the ball at the Fighting Tigers’ 46.
On the first play of the fourth quarter and sixth of the drive, Rogers hit Jaden Davis with a 28-yard pass into the end zone and Davis barely kept one foot inbounds for the touchdown and the Warriors trailed just 21-14.
Bu Ironton’s defense was more than up to the challenge.
Harvest Prep moved from its own 47 to the Ironton 32, but on fourth and 10, Angelo Washington chased Rogers out of the pocket and Carrico put the finishing touches on the sack for a 7-yard loss.
Ironton was forced to punt, but after the Warriors hit a 9-yard pass to Shaun Goinens, Hacker came up with a big defensive play as he intercepted a pass and returned it 15 yards to the Harvest Prep 45.
The Fighting Tigers proceeded to drive to the 3-yard line and then took a knee as time ran out to end the game.
Harvest Prep 7 0 0 7 = 14
Ironton 7 7 7 0 = 21
First Quarter
Irn – Reid Carrico 3 run (Jimmy Mahlmeister kick) 8:14
HP – Jaylen Jennings 29 run (Manguia kick) 4:33
Second Quarter
Irn – Reid Carrico 2 run (Jimmy Mahlmeister kick) 1:55
Third Quarter
Irn – Tayden Carpenter 27 run (Jimmy Mahlmeister kick) 5:53
Fourth Quarter
HP – Jaden Davis 28 pass from Adian Rogers (Manguia kick) 11:53
——
HP Irn
First downs 9 14
Rushes-yards 31-45 45-233
Passing yards 105 60
Total yards 150 293
Cmp-Att-Int 9-18-2 5-10-1
Fumbles-lost 4-3 3-3
Penalties-yards 5-35 7-81
Punts-average 4-33,3 3-21.3
——
Individual Leaders
RUSHING —Harvest Prep: Jaylen Jennings 9-37, Adian Rogers 11-17, Jalen Davis 5-0, Jermaine Townsend 4-minus 9, Jaden Smith 2-0; Ironton: Reid Carrico 25-106 2TD, Trevor Carter 11-64. Tayden Carpenter 8-57 TD, Cameron Deere 3-6.
PASSING — Harvest Prep: Adian Rogers 9-18-2 105 TD; Ironton: Tayden Carpenter 5-10-1 60.
RECEIVING — Harvest Prep: Manny Mullens 1-15, Jaden Smith 1-6, Jermaine Townsend 1-2, Jalen Davis 2-31, Shaun Goinens 4-47; Ironton: Trent Hacker 2-43, Kyle Howell 1-17, Ashton Duncan 2-0.

Fairland Dragons’ running back J.D. Brumfield (4) follows the block of Tevin Taylor (21) to spring him on a touchdown... read more