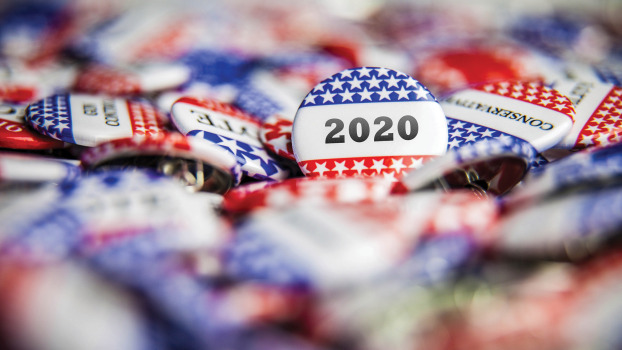 Incumbent GOP ahead for offices; Democrat Burcham behind Baker

As the nation continued to watch the national political numbers remain close into Tuesday night, unofficial results in Lawrence County showed a good night for the county’s Republican Party.

In all of the contested races on the county ballot, Republican incumbents held wide leads after all precincts were reported, with only remaining mail-in ballots to come.

Stephens, who faced only a write-in challenger in the general election, handily won re-election Tuesday night. It was his first election to the office, having been appointed last year when Ryan Smith resigned to become president of the University of Rio Grande.

It was the second election in a row where Republicans, under Stephens’ leadership, took all contested county races, with the party faring strongly in 2018, dominating three races.

“I think it shows the Republican Party represents the values of the people in Lawrence County,” Stephens said. “We had excellent candidates.. And the showing today is the result.”

“The numbers and turnout were great,” Stephens said.

The first candidate to be reached by The Tribune on election night was Holliday, who pulled ahead early.

Holliday said she did not “want to count my chickens before they’re hatched,” as only a portion of the returns had come in at that point.

“But it’s looking like I will get another four-year term,” she said. “I’m excited and honored and it’s humbling.”

Later in the night, after all precincts were in, Holliday led her Democratic challenger, businessman Jeff Blakeman, 68-28 percent.

In the other commission race, Republican incumbent Colton Copley held a similar lead at the end of the night, ahead of independent challenger Douglas Mathew Malone, 64-30.

“I’m honored the people of Lawrence County came out to vote for me,” Copley said. “I look forward to continuing to work with commissioners Holliday and Hayes and other elected officials to make Lawrence County the best it can be.”

It was a long campaign for Lawless, as Ross first announced his run nearly two years ago. Lawless was running for his fourth term on the job.

“I feel really good,” Lawless aid. I’m happy the election is behind us and I can continue doing the job. I’m feeling good.”

It was Knipp’s first election in the office, having been appointed to the job after his predecessor, Stephens, resigned to become a state representative.

He said he was optimistic of his chances for re-election.

“I felt good, but I didn’t want to be overconfident,” he said.

This election was for Knipp to continue filling the term of Stephens. He will be back on the ballot in 2022, if he chooses to run for a full term.

The one office in the county that appeared to change parties for the night was that of Lawrence County treasurer.

“I’m feeling really good and am just looking at the numbers,” Baker said of the results. “This is my first time into politics and I really didn’t know what to expect.”

She said the victory came as a “happy surprise” for her.

Stephens congratulated Baker for her lead and the likely win for their party.

“She got out there and ran a clean campaign,” he said. “She was an excellent candidate.”

In another regional race, State Sen. Terry Johnson, R-14, held a large lead over his Democratic challenger, Ryan Ottney, at the end of the night.

Final results will be released Nov. 14. Mailed ballots that were postmarked before the Nov. 2 deadline will still be accepted and counted until that date.