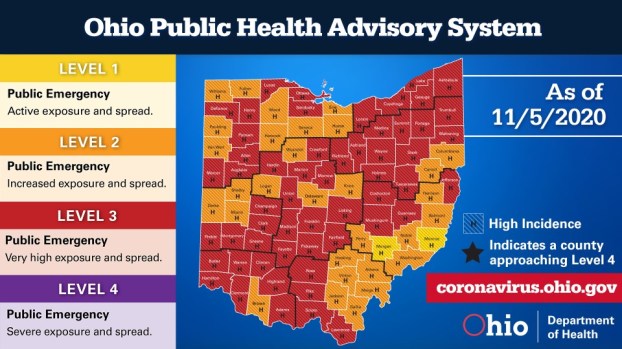 COLUMBUS — Ohio now has more counties at Red Level Three on its COVID-19 alert map than at any time since the system was implemented, Gov. Mike DeWine said on Thursday.

“Our updated Advisory System Map shows that the virus continues to spread throughout all regions of Ohio,” DeWine said. “We now have 56 Red Alert Level Three counties.”

He said the risk continues to grow in the state.

“86 percent of Ohioans are now living in a Red Alert Level 3 county,” DeWine said. “There have been enough cases during the past two weeks that the risk of catching this virus in all 88 counties is very real and very concerning.”

DeWine said the state also set a record a record for new daily cases on Thursday.

Lawrence County remained at Red Level Three for the fifth week. It is the county’s second stint at the designation since the alert system was implemented in the summer. Neighboring Scioto County, also in its second turn at Level Three, saw no change as well.

Gallia and Jackson counties remained at Level Two Orange. All four local counties had an “H” ranking for high incidence, which DeWine said all 88 of the state’s counties were marked with this week, another first.

“All counties — even Monroe and Morgan which are listed at Yellow Level 1 — are high incidence,” DeWine said. “Trends in these counties are similar to the rest of the state — the situation is getting worse and we cannot let our guard down.”

DeWine painted a grim picture for the current situation, pointing out that hospitalizations were also going up.

“We continue to see increases in COVID-19 patients hospitalized, in the ICU, and on ventilators,” DeWine said. “There are 2,075 current patients today which is a 55 percent increase in hospitalized patients, compared to two weeks ago. There are 541 people in ICU. The previous high was 533 in April.”

DeWine said defeating the virus hinges on three things — sticking to basics, such as social distancing, using masks and washing hands, protecting those who are most vulnerable and going on the offense with a pending vaccine.

“We are once again at a critical juncture in our fight against COVID-19.,” DeWine said. “Cases are spiking and are at an all-time high, but, the good news is that we are closer than ever to getting a vaccine. It’s always darkest before the dawn, but the light is coming. Ohio needs to be ready.”

By Austin Johnson For The Tribune BURLINGTON — OVP Health, based in Huntington, West Virginia, opened a drug and alcohol... read more