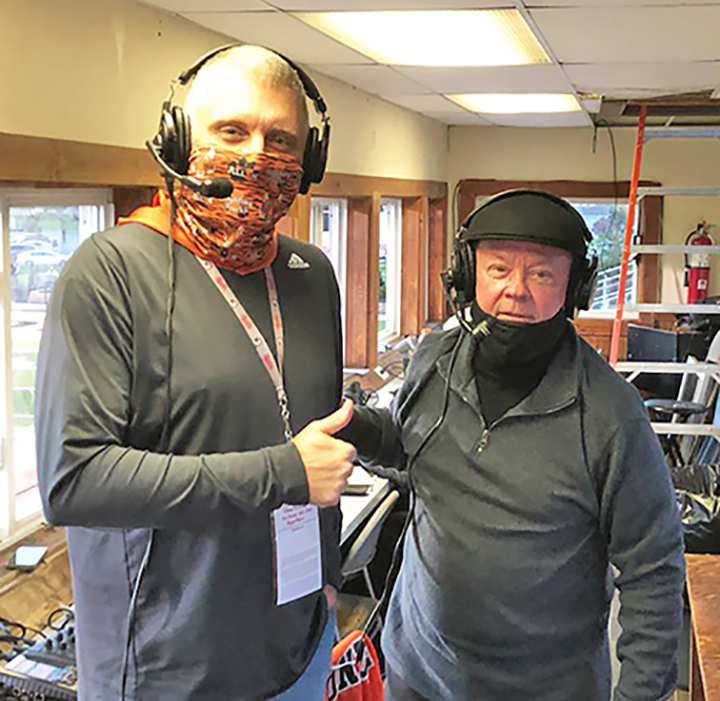 If Rick Mayne is going to have this kind of milestone for his career, he might think of returning more often.
Mayne served as the voice of Fighting Tigers football from 1979-82 with WIRO-AM 1230 radio. He later did games with WXVK-FM 97.1 from 1989-91 full-time and was on loan from another station for the 1986 and 1996-97 seasons.
In his first season, Mayne was at the mic to call Ironton’s first state championship game. His stint with WXVK allowed him to do the 1989 state championship game.
When color commentator Kevin Anthony was unable to call last week’s Ironton playoff game against World Harvest Prep, Fighting Tigers’ play-by-play announcer Jason Philyaw contacted Mayne about filling the void.
“I’m pretty good friends with Jason Philyaw and we were talking one day and he said it would be a kick if we called a game together. He said let’s consider the possibility,” said Mayne.
“Jason called me last Tuesday and I told him I didn’t want to take someone’s place,” said. “He said ‘No, I have an open set of headsets and you’re the first person I thought of.’”
Mayne arrived and worked the game with Philyaw but was unaware of milestone that was hovering over the game.
Besides being a playoff game, it was an opportunity for Ironton to register the program’s 700th career win.
Mayne said the win was significant, but moreso for all the Ironton teams since the program’s inception.
“Now that I’m aware of it, it’s reflective of consistency for a long period of time A lot of other teams had to win over long stretches of time. That covers a lot of eras of Ironton football. To be a playoff game and then the significance of being the 700th win adds an extra layer of luster to it.”
Mayne — a 1973 Ironton graduate — said he has seen a lot of Ironton wins and accomplishments during his lifetime.
“To get to 700 wins and I just happened to be there makes it another special notch. It might not mean a lot to other people, but it was a nice thought for me and I’m grateful to Jason for extending me the invitation. That’s just being lucky. That’s a tremendous achievement for the program,” said Mayne.
Ironton is 700-415-44 overall in program history. Bob Lutz was the head coach for 361 of the wins leaving 339 for the other Ironton coaches combined.
“For one man to have more than 50 percent of the wins and the difference of the exposure now compared to then is pretty unique. Back in the early years, you might get a score on television or talk about it at the grocery and that was it,” he said.
Mayne was glad to call a game with Philyaw whose first season of calling Ironton football games was 1998.
“The time I did Ironton games wasn’t a long stretch. No one has stayed with Ironton sports as long as Jason,” Mayne said.
Mayne began at WIRO-AM 1230 radio before moving to other stations in the area. He said he remembers when WXVK — now B-97.1 FM radio — just began operating out of Huntington, W.Va., and also did Ironton football games.
During one pre-game visit for the coach’s show, Mayne was sitting in the office waiting for Lutz when Ironton basketball coach Phil Rice came in and starting talking. When he saw Mayne, he began to talk about the broadcast of the Ironton game on WXVK not knowing it was Rick Mayne since he used the name Rick Charles and color man Steve Reinhart went by the name Steve James.
“We were in the office and coach (Bob) Lutz was busy. Rice was sitting in the office and started talking about those guys who did the game on the radio last week and his comments were very positive,” said Mayne.
Sitting in the office was assistant coach and athletic director Mike Burcham who just started grinning. After letting Rice talk for several minutes, Burcham began to laugh.
“You dummy. It’s those guys right there,” said Burcham as he pointed to Mayne and Reinhardt.
Yet another memory for Rick Mayne’s career.