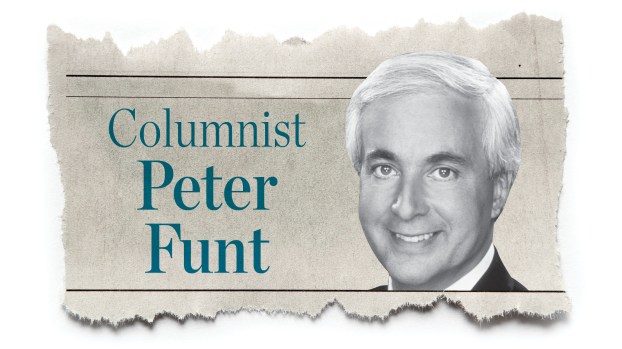 Peter Funt: How real should reel life be?

Hollywood must deal with the burden of producing TV programs during a pandemic and at a time of social and political upheaval in our country. Viewers, however, deserve better than to endure heavy on-screen doses of the very things they are hoping to escape in real life.

The issue was brought into sharp focus in the season premiere of NBC’s drama “This Is Us,” which has pleased audiences and won numerous awards. Now, after four years of untangling the complicated fictional lives of the Pearson family, we find the characters discussing George Floyd’s death and Black Lives Matter, while wearing masks to cope with COVID-19.

Although too melodramatic for some, I’ve loved the series. The writing is compelling, the dramatic themes believable, and the acting exceptional. Most appealing is the show’s deft intercutting of scenes from the characters’ lives spread over several decades.

The producers had long developed a storyline that would play out over the final two seasons. Then, when the pandemic hit and production was delayed, a decision was made to incorporate both the coronavirus and racial strife in new episodes. The show’s creator, Dan Fogelman, said it would have “felt almost irresponsible” to avoid writing actual events into the plot.

The NBC series is not the first to take on current themes. Netflix’s eight-part anthology “Social Distance” fictionalized the lives of people dealing with the pandemic, as did the four-part “Love in the Time of Corona,” distributed by Hulu. But these are limited-run projects, designed expressly to explore the effects of the pandemic.

An established series like “This Is Us” faces different obstacles when dipping into current events. If the Pearsons wear masks and talk about COVID-19, and if Randall Pearson’s Black family agonizes over George Floyd’s death, then who are the Pearsons voting for? How can a series be so “on the nose,” as Hollywood puts it, about viruses and protests, while ignoring the most divisive election of our times?

It can’t. Fogelman was right to skip the election, telling the LA Times, “I don’t think our show is the forum for it.” But he was creatively misguided to cherry-pick other topics from the headlines. Earlier, for example, the show developed a compelling political theme about Sterling K. Brown’s character, Randall Pearson, running for city council in Philadelphia, while staying clear of real-life politics. Similarly, we see Pearson exploring his Black identity, but we don’t need it reenforced by actual news about protests in Minneapolis.

Medical dramas, including ABC’s “Grey’s Anatomy” and “The Good Doctor” have incorporated coronavirus themes for this season. Even the animated series “South Park” had a pandemic-themed special, a standalone episode on Comedy Central.

Hollywood’s rush to relevance could be a serious misjudgment about viewers’ interests during these stressful times. For some of us, the drone of television’s “breaking news” provides as much topical tension as we can tolerate.

Fogelman and his team are taking “This Is Us” down a rabbit hole where art imitates the very things in life we’d just as soon forget, at least for an hour or so.

Peter Funt is a writer and speaker. He can be reached at www.CandidCamera.com.

Since President Obama launched the My Brother’s Keeper (MBK) program in 2014, our office has been working with leaders around... read more