Rutgers up next for streaking Buckeyes 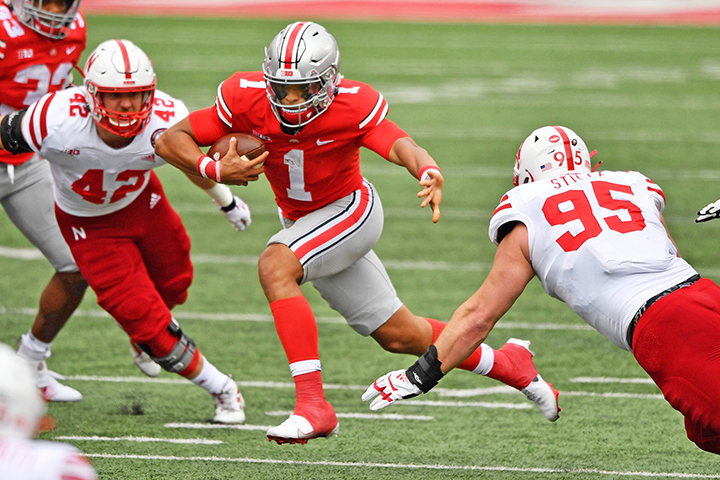 COLUMBUS (AP) — In Ohio State’s first play from scrimmage against Penn State, slot receiver Garrett Wilson took a handoff, cut around the wide open left end and romped 62 yards to set up the Buckeyes’ first score.
A big play and another hot start for No. 3 Ohio State (2-0, 2-0 Big Ten), which released its pent-up demand for scoring after having the Big Ten season delayed by the COVID-19 pandemic.
After rolling over Nebraska 52-17 in the opener, the Buckeyes piled up 526 yards of offense in taking down then-No. 18 Penn State 38-25 on Halloween.
Rutgers (1-1, 1-1) is next to try to slow down quarterback Justin Fields and Ohio State. A batch of transfers have bolstered the Scarlet Knights in coach Greg Schiano’s second stint running the program, but they’ll still come into a nearly empty Ohio Stadium for Saturday night’s game as five-touchdown underdogs.
Ohio State coach Ryan Day did his best to tamp down expectations, noting there were many mistakes last week that need to be cleaned up — an errant shotgun snap, two missed chip-shot field goals, and nine penalties that cost the Buckeyes 80 yards.
“We’re not there. We’re not close,” he said.
Behind quarterback Noah Vedral, a graduate transfer from Nebraska, Rutgers shocked Michigan State 38-27 in the season opener. Last week he threw two touchdowns passes but also had three picked off, leading to 17 points for Indiana in the Scarlet Knights’ 37-21 loss.
WHITE COMES HOME
Rutgers senior safety Brendon White grew up outside Columbus and played at Ohio State from 2017-19.
He was defensive player of the game in the 2019 Rose Bowl win, but his playing time dwindled the following season under Day’s new staff and he went the transfer route.
Ending up at Rutgers wasn’t a surprise. He got along well with Schiano, who was the Buckeyes’ defensive coordinator during part of the player’s time in Columbus.
Two games into his Scarlet Knights career, White is third on the team with 17 tackles. He had an interception and a fumble recovery in the win over Michigan State.
“I’m just glad to be able to play in the Horseshoe one more time, to be able to play in my home state and hopefully have some family come and watch,” he said.
HEISMAN HYPE
With Clemson quarterback Tyler Lawrence sidelined by the coronavirus, Fields has a chance to make some noise in the Heisman race.
After going to New York as a finalist last year, Fields is playing like he wants to be there again. He was 28 for 34 for 318 yards and four touchdowns last week after a nearly flawless performance the week before in the opener (20 for 21, 276 yards, two TDs.)
READY FOR PRIME TIME
Schiano — who was 68-67 with Rutgers from 2001-11 — said playing in a Saturday night TV game is a big deal as he works to build a winning culture and respectable program again.
“It’s in prime time, and in talking to the people here we haven’t had a ton of those,” Schiano said.
“So that makes it special for the kids. I’m looking forward to competing. Our guys are. They picked themselves up after a tough loss, dusted themselves off and really worked hard. As a coach, that’s what you look for.”
D-LINE DOMINATES
The Ohio State defensive line is doing just fine without Chase Young, the superstar defensive end who was a Heisman Trophy finalist and first-round NFL draft pick.
Junior defensive tackle Tommy Togiai was named Big Ten Defensive Player of the Week after recording three sacks against Penn State. Senior defensive end Jonathon Cooper had a career-high five tackles.
Three other linemen had sacks the week before against Nebraska, including defensive tackle Haskell Garrett, who two months earlier was shot in the face while trying to break up an argument on a street near campus. The bullet tore through both of his cheeks.
TRAINERS ROOM
Ohio State cornerback Cameron Brown will miss the rest of the season with an Achilles tendon injury. He had been heavy in the cornerback rotation so far, and Day said losing him is “very costly.” … Buckeyes kicker Blake Haubeil suffered a groin injury last week and is day to day.