Ironton battles by Ridgewood 17-7 for berth in Final Four 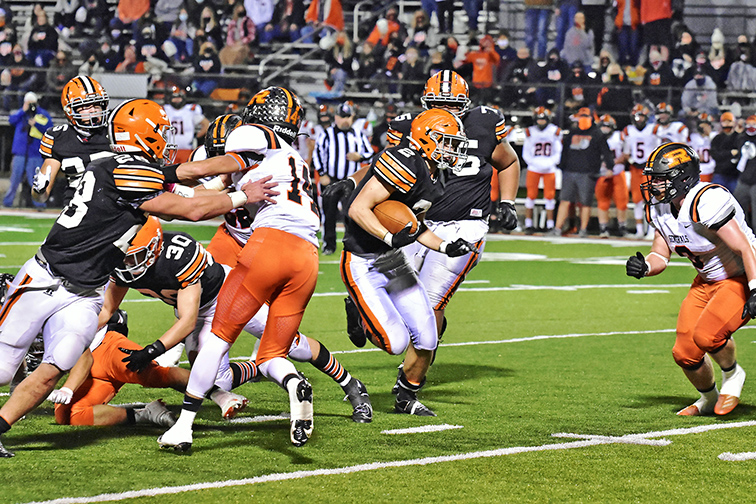 Besides being a Division I linebacker, Reid Carrico has been a big offensive weapon for the Ironton Fighting Tigers this season.
He has ran for more than 1,300 yards, scored 23 touchdowns and caught a lot of key passes.
But on Saturday night, Ironton coach Trevon Pendleton asked Carrico to do something else: block.
Tied 7-7 with a net minus-6 yards rushing in the first half, Ironton went to the stacked-I formation using Cameron Deere and Carrico as lead blockers along with help from tight end Ashton Duncan to open holes for Trevor Carter.
The alignment paid big dividends as Ironton rushed for 148 yards in the second half and went on to beat the West Lafayette Ridgewood Generals 17-7 to capture the Division 5 Region 19 championship and a berth in the state semifinals for the second straight year and 13th time overall.
Ironton (10-0) will now play the Cincinnati Roger Bacon Spartans in the Final Four at 7 p.m. next Saturday in London which is just off I-70 midway between Columbus and Springfield.
Roger Bacon beat Springfield Shawnee 31-7 in the Region 20 championship game.
“It just says a lot about their character and the type of kids they are,” said Ironton coach Trevon Pendleton. “They work their tails off all year and put themselves in situations to be successful.”
Carter — who did not play in the first half — carried 16 times for 67 yards while Carrico finished with 66 yards on 13 attempts and two touchdowns including the go-ahead scored with 11:16 to play.
The game was a matchup of two stellar defenses and they lived up to the billing.
Ironton limited the Generals to 121 total yards and seven first downs — two on penalties — with just 83 yards rushing and 38 passing.
“That defense is pretty special. We actually dropped an interception we should have had on their scoring drive,” said Pendleton. “But they get after it and they do a great job.”
Ridgewood (9-1) was missing quarterback Gabe Tingle who has thrown for more than 1,000-yards this season. Tingle was injured last week in a 13-10 win over Wheelersburg last week in the regional semifinals.
Ironton scored on its first possession of the game following a Ridgewood punt.
The Fighting Tigers went 71 yards in eight plays highlighted by a 52-yard pass-and-run from Tayden Carpenter to Kyle Howell to the Generals’ 17.
A 15-yard pass from Carpenter to Ashton Duncan put the ball at the 1-yard line and Carrico did the honors on the next play to put Ironton up 6-0.
Jimmy Mahlmeister kicked the conversion with 6:08 on the clock.
Ridgewood fumbled the kickoff and Ironton’s Jon Wylie recovered at the Generals’ 23-yard line.
But the Ridgewood defense dropped Carpenter for a 3-yard loss and then forced three straight incomplete passes.
The Generals put together a13-play drive aided by two Ironton penalties but stalled and were forced to punt.
Three plays later, Dalton Patterson came up with an interception and Ridgewood had the ball at the Ironton 45.
A couple of key passes of 19 and 13 yards from Javan Belt to Kigenn Millender got the ball to the Ironton 10 and Deontae Brandon scored on a fourth-and goal from the 2-yard line with 1:07 left in the half. Andy Troyer’s conversion kick tied the game going into the half.
“(The Generals) are a good football team and they do a lot of good things. They were able to control the line of scrimmage in the first half and keep the ball from us. They played with great pad level and they were hungry,” said Pendleton.
“You can’t keep your defense on the field for two-thirds of the first half and expect them not to eventually break and they did. The second half, we challenged our kids and they challenged themselves. We came out and executed and started controlling the line of scrimmage.”
Ironton drove the ball to the Ridgewood 36 to begin the second half but fumbled the ball away.
The Fighting Tigers got the ball back after a punt at the 28-yard line and began the go-ahead scoring drive.
The march began with another big pass play, this time Carpenter found Trent Hacker who made one of his patented leaping catches for 39 yards to the Generals’ 33.
A 16-yard run by Carpenter on a third down quarterback sneak put the ball at the 11 and four plays later Carrico waltzed into the end zone from a yard out with 11:16 to play.
Mahlmeister tacked on the conversion kick and it was 14-7.
Hacker came up with another big catch four plays later only this one was on defense as he intercepted a pass for the second straight week and Ironton had the ball at their own 23.
Six straight running plays including a 24-yard blast by Carrico to the Ridgewood 37.
Carrico had a 9-yard run and then caught a pass for 17 more yards to the 21. A penalty moved the ball to the 11 but the drive stalled at the 8-yard line.
Mahlmeister came on and booted the clinching 25-yard field goal with only 1:48 to play and it was 17-7.
“A two-score game with that little amount of time left was huge,” said Pendleton.
Ridgewood’s final hopes died two plays after the kickoff when Uriah Meadows got his second interception in two weeks to seal the outcome.
Saturday’s game was a rematch of last season’s regional championship game when Ironton won 24-14 at Nelsonville-York.
Ridgewood 0 7 0 0 = 7
Ironton 7 0 0 10 = 17
First Quarter
Irn – Reid Carrico 2 run (Jimmy Mahlmeister kick) 6:08
Second Quarter
RW – Deontae Brandon 2 run (Andy Troyer kick) 1:07
Fourth Quarter
Irn – Reid Carrico 2 run (Jimmy Mahlmeister kick) 11:16
Irn – Jimmy Mahlmeister 25 field goal 1:48
——
RW Irn
First downs 7 13
Rushes-yards 28-83 41-142
Passing yards 38 127
Total yards 121 269
Cmp-Att-Int 5-10-2 6-11-1
Fumbles-lost 2-1 1-1
Penalties-yards 6-56 6-51
Punts-average 4-35.3 0-00.0
——
Individual Leaders
RUSHING —Ridgewood: Deontae Brandon 16-38, Kigenn Millender 5-22, Bryce Prater 2-6, Javan Belt 3-15, Kurt Varian 1-3, Xavier Lamneck 1-minus 1; Ironton: Reid Carrico 13-66 2TD, Trevor Carter 16-67, Tayden Carpenter 8-11, Cameron Deere 2-0, Kyle Howell 1-minus 1, team 1-minus 1.
PASSING — Ridgewood: Javan Belt 5-9-2 38, Calvin Kohman 0-1-0; Ironton: Tayden Carpenter 6-11-1 125.
RECEIVING — Ridgewood: Kigenn Millender 4-36, Braden Maleski 1-2; Ironton: Kyle Howell 1-52, Trent Hacker 2-41, Reid Carrico 2-19, Ashton Duncan 1-15.

HUNTINGTON, W.Va. (AP) — Once Brenden Knox got the ball, No. 16 Marshall was off and running. Knox scored twice... read more