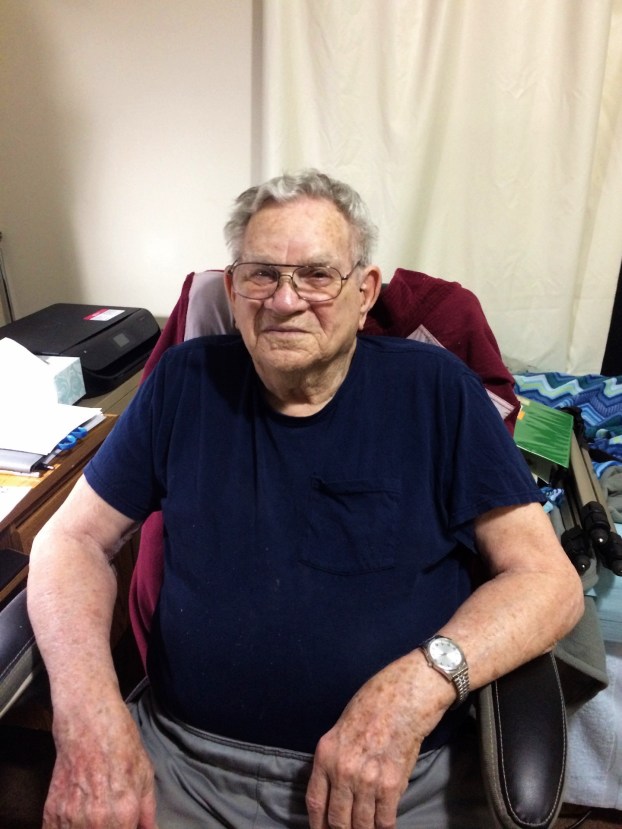 Bernie McMellon, 94, a Barboursville, West Virginia native, is a U.S. Army veteran of World War II. Now living at the Wyngate at RiversEdge in Rome Township, says his time in the military prepared him for his career path in life, working as a representative for the top electronics companies. (Submitted photo)

ROME TOWNSHIP — Bernie McMellon, a Barboursville native, says the military set him on a path that helped his entire career and life.

He is a U.S. Army veteran of World War II, though he said that branch of service was not his first choice. He first enlisted in the Navy in 1943.

“But I didn’t stay,” he said, noting they found out that he was only 16 and below the required age to sign up.

After that, he went to Charleston, South Carolina, where he was set on joining the Merchant Marines.

“But when I saw how all the ships were being torn up, I changed my mind,” he said.

Finally, he enlisted in the Army in 1944, first being trained in Florida and Missouri and then Fort Jackson in South Carolina, before being shipped out to Germany.

In the final months of the war’s European theater, McMellon said he did not take part in combat himself.

He said there were still dangers in the job.

“I would get shot at a few times,” he said. “But nothing serious.”

After he was discharged from the military in 1945, he said he moved to Huntsville, Alabama, where he spent most of his life.

A Milton High alumni with an interest in electronics starting in his adolescence working with ham radio, he got further schooling from the University of Mississippi and went to work in the electronics industry and as a technician installing X-ray equipment.

He eventually served as a representative for electronics companies and traveled the world.

He retired from the electronics industry in 1965 and eventually took up woodworking, a business he stayed at, doing things such as designing furniture for Cracker Barrel restaurants, until 2006, when his wife died.

McMellon spoke of some hard times he fell on following her death, to which he credits the Veterans Administration for helping him.

“They took such good care of me,” he said.

He said as a thank you, he wanted to give the doctors gifts, but they would not accept them.

Instead, he put his electronics skills to work and crafted something special.

Taking empty bill bottle, LED lighting, AA batteries and a switch — and doing the wiring himself, he created small flashlights to give to the doctors and nurses.

Each flashlight was accompanied by a spiritual message and his contact information. McMellon credits turning strongly to God with helping him through the hard times after 2006.

Altogether, he said he made 600 of the lights.

He gives special thank you to Goodwill Industries for their help with the project.

“At first, I couldn’t find the wire to work inside,” he said. But he said Goodwill hooked him up with computer cables he could cut open up for the purpose.

In 2018, he was invited to speak at Goodwill Industries of KYOVA’s annual awards ceremony as a result of his effort.

Now 94, McMellon lives at the Wyngate at RiversEdge in Rome Township. He has been a resident of the senior living community for two years.

Of his time in the military, he said it was a great benefit to him. He said he may have stayed in longer, had his wife wanted it.

“But she wasn’t interested in the military life,” he said.

Over the years, he said he has been a member of several veterans organizations.

His later career often had him working to supply the military and he credits the service for helping set him on his life’s path.

“To be frank, it’s the one thing in life that laid out my plans,” he said. “It was a wonderful experience.”

This year, the local celebration of Wreaths Across America will be Dec. 19. Every year, hundreds of people gather at... read more