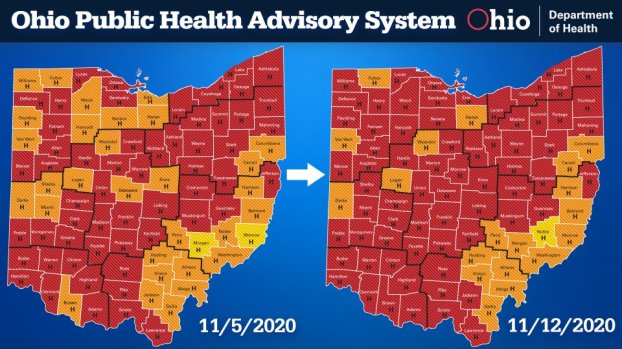 Lawrence and Scioto continue at Red, now joined by Jackson

COLUMBUS — The COVID-19 situation continues to worsen in Ohio, with 68 of the state’s 88 counties now listed at Red Level Three on the latest alert map, issued on Thursday.

“The entire state is filling in with red,” Gov. Mike DeWine, who addressed the state the previous night and announced a revised mask mandate, said at his news conference on Thursday.

Lawrence County continued at Red Level Three for the sixth week, its second stint at the designation.

Among neighboring counties the situation had grown more severe, with Jackson County now listed at Red for the first time, while Scioto County continued its second stint at the designation. Gallia County was one of only 19 counties at Orange Level Two.

Only one county in Ohio, Noble, the third least populated in the state, was listed at Yellow Level One.

No counties have yet reached Purple Level Four, the most severe on the four-tier system, though several are on a watch list.

This week’s map was the most severe for the state since the system was implemented during the summer and a major spike from last week, when 56 counties were listed at red.

“68 of our counties are now red and Franklin and Tuscarawas counties are on our watch list,” DeWine said of those approaching Level Four. “Today’s new red counties are: Brown, Delaware, Erie, Hancock, Jackson, Knox, Miami, Paulding, Seneca, Shelby, Williams and Wood. 8 of these counties are red for the first time.”

DeWine also announced that the state is setting aside $30 million to assist county health departments with the pandemic.

“Each department will receive $200,000 and they will have the flexibility to determine how to best use the funds as they see fit to fight COVID-19,” the governor said. “The remaining money will be used to hire contact tracers to support local health departments. Those tracers would be able to deploy wherever they are needed across the state to assist in identifying individuals who may have been exposed to COVID-19 and prevent further spread. As we have throughout this pandemic, we will continue to offer state resources and support to help fight COVID-19 at the local level.”

On Wednesday, DeWine said the worsening situation could lead to closures of restaurants, gyms and other business, as was the case in the spring.

The governor said at Thursday’s news conference that he does not want another shutdown.

CINCINNATI (AP) — The former head of an Ohio county jail who has filed a federal complaint saying she was... read more