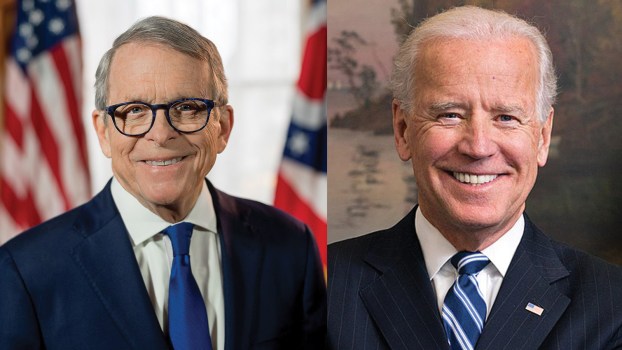 DeWine: ‘Biden is the president elect’

COLUMBUS — In a break with many in his party, Ohio Gov. Mike DeWine said on Thursday that former Vice President Joe Biden is the president-elect following the 2020 general election.

When interviewed on CNN Thursday, DeWine was asked about the election, which President Donald Trump still disputes and has not conceded.

DeWine said Trump had “every right” to pursue legal challenges regarding the election, stating the courts were the best place to “adjudicate the facts.”

But the governor said he did not know if Trump’s claims had any merit.

“Look, I’m worried about this virus,” DeWine said. “I’m not looking at what the merits of the case are. It would appear that Joe Biden is going to be the next president of the United States.”

DeWine’s interview on Thursday was more pronounced than a statement he issued earlier.

“I congratulate Vice-President Biden,” he said Monday. “When lawsuits have concluded and election results are certified, it is important for all Americans to honor the outcome.”

DeWine is one of few major Republican leaders to congratulate Biden. In Ohio, U.S. Sen. Rob Portman has not done so and has issued a statement on Trump’s efforts at legal challenges and recounts.

Only a handful of Republican senators, such as Susan Collins, of Maine, and Utah’s Mitt Romney, have publicly agreed with the call of the race.

DeWine also stands in contrast to the Ohio Republican Party, who said in an email that the race is still contested.

“It is premature for Democrats and the media to call the race for Biden when there are many questions regarding fraudulent voting that have yet to be answered,” party chair Jane Timken wrote in the email.

Trump has alleged fraud in the race and vowed to take his argument to the U.S. Supreme Court, however the president has not presented evidence or outlined a legal scenario that would bring a case there.

The Associated Press called the presidential race for Biden on Saturday, Nov. 7, after four days of vote counting gave Biden leads in the battleground states of Pennsylvania, Georgia, Nevada and Arizona. Broadcast networks NBC, ABC and CBS agreed with the call, as well as cable outlets FOX News and CNN.

Final results are expected in those states in coming days, while Georgia officials have said a hand recount will be conducted.