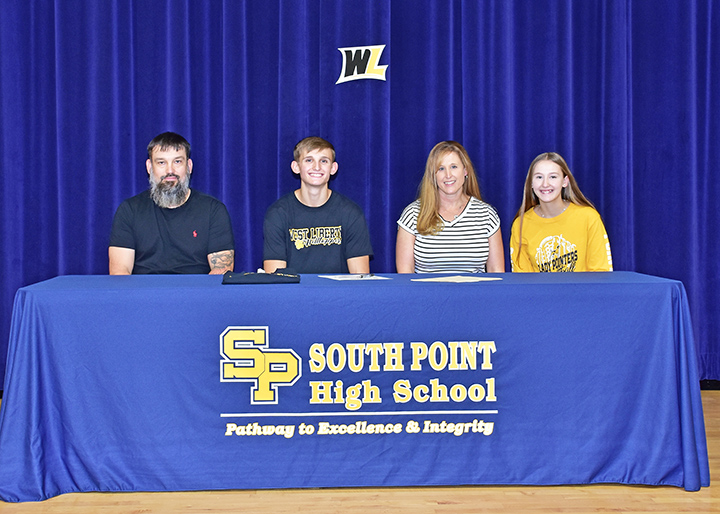 SOUTH POINT — Austin Webb has gone from a 140-pound freshman to a 175-pound senior.
But Webb has done a lot more growing than just some weight gain.
In fact, Webb’s evolution during his four years playing basketball for the South Point Pointers has been so impressive he garnered the attention of a lot of college programs.
On Wednesday, Webb removed some mental weight from his body as he secured his future by signing a letter-of-intent scholarship with the West Liberty University Hilltoppers.
“This just lets me focus more on this year and this season with my guys and we can win some games and hopefully change the district banner in there,” said Webb referring to changing the recent banner from district runner-up to champion.
Last season the 6-foot-3 Webb averaged 22.4 points a game last season along with 7.3 rebounds, 1.9 assists, 1.4 steals and 1.6 blocked shots.
Due to a torn muscle injury, he missed the end of the season and fell 10 points shy of 1,000 points.
“I would have had it if I hadn’t got injured last year, but the first game this year I’ll be back with 1,000,” said Webb.
“It was the weirdest thing, I tore my groin somehow. I woke up the next morning and I had torn my groin and then I got the flu and I was in the hospital for two weeks. I lost 20 pounds.”
Pointers’ head coach Travis Wise said Wise has grown both as a player and a person during the past four years.
“Austin is a great kid. Individually as a person he is just top-notch,” said Wise. “Great, great kid. Academics, he’s a 4.0 (grade point average) and going to be the valedictorian of his class. He came in as a skinny freshman, about 140 pounds, and had to play the post and then we started moving him out away from the basket.
“He’s worked his butt off all the way up. Never missed an open gym, never missed a workout. Just a great ballplayer and the ceiling, he’s still got room to grow. He’s always in early and stays late. If we had 12 of him, our job (as coaches) would be a lot easier.”
Webb said he talked with Marshall University on a few occasions as well as other schools in Mountain East Conference that includes Alderson Broaddus, University of Charleston, Concord University, Davis & Elkins College, Fairmont State, Glenville State, West Virginia State, Frostburg State, West Virginia Wesleyan, Wheeling University and Notre Dame College of Ohio.
But after weighing his options, Webb decided on the NCAA Division II program for several reasons including head coach Ben Howlett.
“I had a lot of D1 interest, but I thought this was the best option for me,” said Webb.
“I just liked their coach. Their coach is really good guy and he’s straight up with everything. I just like that they have a good, winning program and they send a lot of players overseas and that’s something I want to do is go play basketball overseas. I just felt it was a good fit for me.”
West Liberty plans to keep Webb on the outside when he lands on campus.
“I’m going to be doing pretty much what I’m doing now. Just run up and down the floor and shoot 3s,” said Webb with a grin.
Wise said Webb’s work ethic is something that will keep him improving.
“He comes in early. We come in at 6 o’clock in the morning and he calls and says, ‘can I get in early?’ Three days a week he’s coming at 6 o’clock in the morning working on his shot. He just works hard,” Wise said.
Besides being a good player, Wise said Webb is a leader by example and should have a lasting effect on the Pointers’ program and he will do the same for West Liberty.
“I told Coach Howlett you’re getting a kid who is a gym rat. He loves to be in the gym and he loves to get better,” said Wise.
“And he still has something to prove. As a player, he still thinks there’s room for him to grow. That’s what I like about him. He’s not content to be where he is right now. He’s a great kid to have in the program and hopefully the younger kids will see that and work to get better.”
Webb is undecided on a major and said, “I’ll just see whatever fits me.”