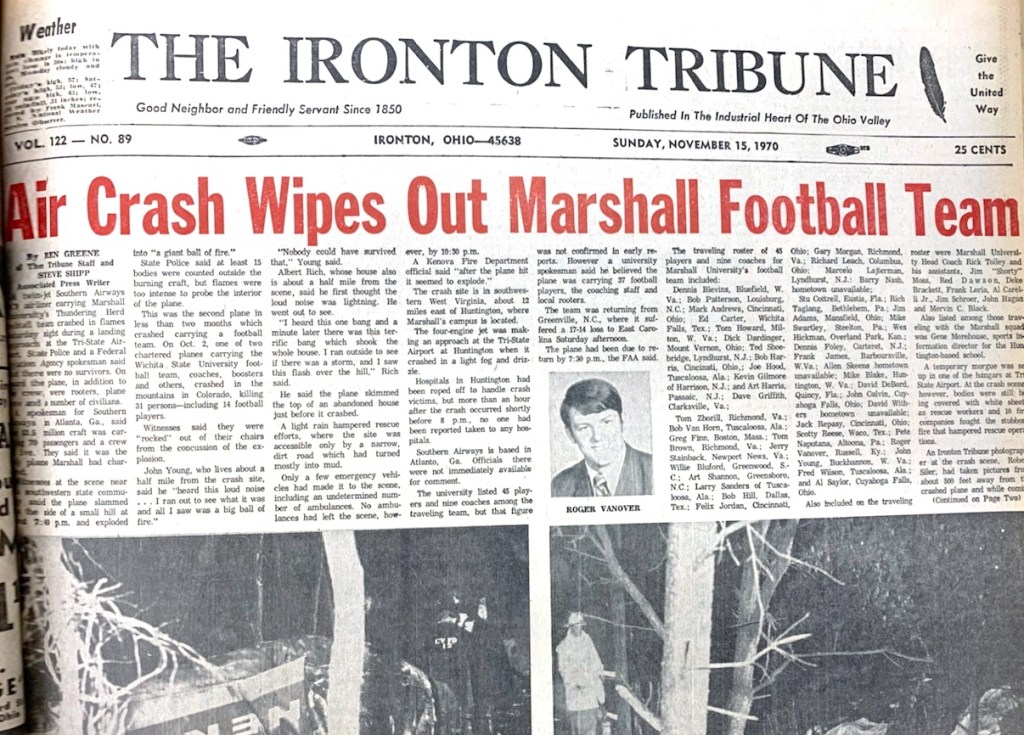 The front page of The Ironton Tribune on Nov. 15, 1970, the morning after the crash.

HUNTINGTON, W.Va. — The Tri-State is set to mark a somber anniversary this weekend, as Saturday is the 50th anniversary of one of the biggest tragedies to ever hit the region.

The jet was returning the team home from Greenville, North Carolina, following a game against East Carolina University.  All 75 on board the flight were killed in what has been called the worst sports-related disaster in U.S. history.

Investigators found the jet was flying too low on its approach, attributing the error to either faulty equipment or the inability of the pilots to read their instruments.

“We mourn because we have lost so many of our own kind,” Michael Gant, the student body president for Marshall at the time, said at a memorial service the following evening at Veterans Memorial Fieldhouse in Huntington. “We students feel pain so deeply that we cry. We gave a part of our soul. Maybe that is why we are cut so deeply, because a part of our soul went with them.”

As Huntington was devastated by the news, the tragedy was felt hard in Lawrence County as well.

On Monday, Nov. 16, the Ironton Tribune mourned those lost in a front page editorial.

“It was a tragedy that touches the lives of all of us here in the Tri-State because we knew many of those who died on that muddy hillside in Kenova,” it read. “All this year, we have shared their glee in victory and their grief in defeat. We have cheered them and criticized them — and now we mourn them.”

The editorial stated that, as the news of the crash began coming into the newsroom on the night of the crash, the staff at the paper did not fully comprehend the magnitude of the loss until reporters got on the scene. “All the players, members of the coaching staff, the reporters and the fans who died on that plane were friends of all the people in the Tri-State,” the piece read. “We couldn’t really believe that they were gone. But they were and, today, we begin to attempt to understand why this tragedy occurred; something we’ll never really have clear in our minds.”

On Tuesday, Nov. 17, superintendent Harvey Butcher ordered all schools in Lawrence County to observe a three-minute silence for the victims of the crash.

One Lawrence County resident was among those dead, while several others had ties to the county.

Norman Weichmann, 49, of South Point, went on the trip to assist his friend, Donald Booth, of Huntington. The two filmed games for the coaches as the team did not have an official photographer.

Weichmann, a Timpas, Colorado native, was a Marine veteran of World War II and manager of five plants for Chemtron’s Pigments Division in Huntington. He left behind a wife, Jane, who was working at Cabell Huntington Hospital when she learned of the crash, and two daughters, Cynthia and Katherine. He is buried in Ridgelawn Memorial Park in Barboursville, West Virginia.

Marshall Athletic director Charles E. Kautz, 45, of Huntington, was well-known to Lawrence County and described by Tribune staff as “warm, friendly and gruff.”

A Marine veteran of World War II and Korea, his career had taken him to both Ironton and Rock Hill high schools, from 1949-1961 where he was a coach and compiled a 74-25-1 record and the two schools and Ceredo Kenova High School before joining Marshall’s staff in 1961 and became director in 1969.

Kenneth E. Jones, 43, was on the trip to film the game for coach Rick Tolley.

Named West Virginia sportscaster of the year in 1969, Jones was known to the area for his broadcasting of Ironton and Ashland sports activities from 1964-1968 as sports director for WHTN-TV in Huntington. He also worked at WIRO radio in Ironton and the Ashland Daily Independent.

Ray R. Hagley, 34, of Huntington worked in Chesapeake in the 1950s and 1960s and was the physician for Chesapeake High School’s football team. He continued to serve the school’s basketball team and was active in Chesapeake athletics until his death. His wife, Shirley Ann Mealey Hagley, 35, also died in the crash.

Marshall defensive end Roger Vanover, 19, was known to area for his athletic accomplishments. A 1967 graduate of Russell High School and a member of The Ironton Tribune’s All Star Team.

A Paintsville native, he was attending Marshall on a football scholarship and also played on the school’s bas ketball team in the preceding year. He was survived by his parents, and two brothers.

The football program at the school slowly rebuilt after the disastrous loss, eventually winning Division I-AA national championships in 1992 and 1996, as well as the most wins of any U.S. team in the 1990s.

The tragedy and the rebirth of the program have been central in the school’s identity in following decades, and have been the subject of books, documentaries and the 2006 film “We Are Marshall.”

Each year, the university marks the anniversary of the crash at the memorial fountain at the student center, when the water is turned off until spring.

However, due to the COVID-19 pandemic, the ceremony for the 50th anniversary on Saturday will be by invitation only. The event will be livestreamed at livestream.com/marshallu and is set to begin at 9 a.m. Events will run through 12:30 p.m.