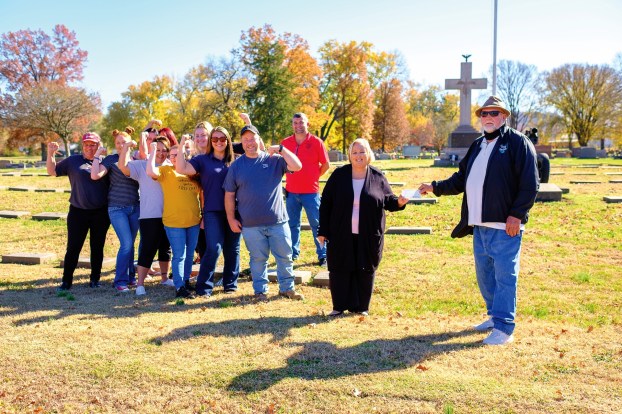 On Monday, Wreaths Across America got some assistance in their mission to place a wreath on headstones of veterans at Woodland Cemetery.

Laura Brown, who co-chairs the group with her sister, Sally Inglis, said they usually have fundraisers, such as dinners at the American Legion, to pay for the effort. But due to the COVID-19 pandemic, that was not possible this year.

In the absence of traditional fundraisers, they received a $2,000 donation from the Veterans Memorial Race Committee of Ironton, which typically sponsors 5K events in the county and sponsors scholarships for veterans and their dependents.

Joe Isaac, president of the committee, said because of the pandemic, they were not able to hold races, so they decided to work with local groups and charities for alternate efforts.

“This is another way we can continue to honor veterans,” he said.

Brown, who took over running Wreaths Across America last year following the death of its co-founder, Juanita Southers, said, in 2019 they were able to place a wreath on nearly every veteran’s headstone at the cemetery.

She said thanks to the donation, they would try to place a wreath on every other one this year.

On Monday, the group, along with volunteers from recovery programs who were putting in community service hours, worked to clean up the cemetery in advance of Veterans Day. Lawrence County Recovery donated $1,000 to the effort.

Lawrence County Commissioner Colton Copley was also on hand and made a $100 donation to the project.