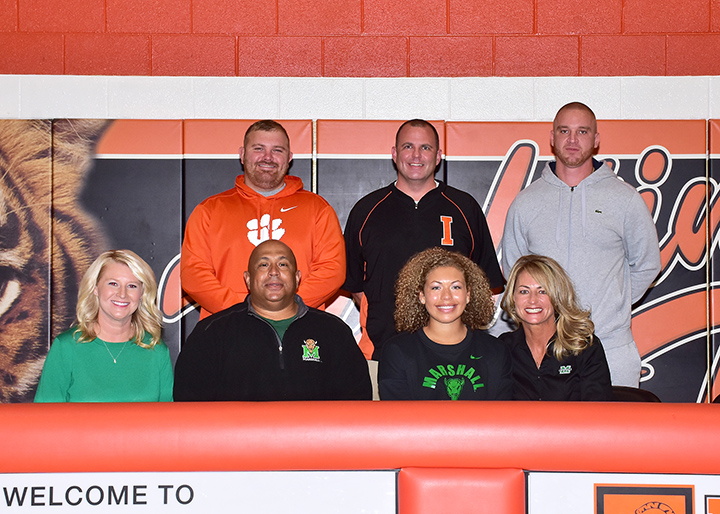 The Marshall women’s basketball team added another local star to the mix with the addition of Ironton Lady Fighting Tigers’ Samantha LaFon.
The senior standout averaged 13 points per game and 11 rebounds a season ago for the Lady Fighting Tigers, but will skip out on her senior season.
Lafon will early enroll in the spring semester at MU and she made the decision based on her future adding, “It was the best decision for me to get a year at the Division I level without it affecting my eligibility and transitioning my game to the college style.
“I am going to miss my team, this gym and playing for Ironton because it is special to play for this town, but I’m betting on my future and continuing my family’s legacy.”
The senior forward’s eligibility clock for the NCAA will not begin until July, so this will give LaFon a season to practice and work on her game with other college athletes ahead of schedule.
Marshall made Samantha feel wanted by showing her a lot of interest. That interest combined with the University’s proximity to home is what made the decision an easy one for LaFon.
“I can’t wait to be a part of the Thundering Herd tradition. They play really hard and they have a really good coaching staff. The first time I talked to Coach Kemper on a zoom call I knew that’s where I wanted to be,” said LaFon who is the daughter of former Ironton basketball coach Mark LaFon.
The 6-foot senior did most of her damage in the post during her high school career, but will be focusing on expanding her game by focusing on dribbling and shooting to become more of a threat on the perimeter.
She will be used in a stretch forward position for the Herd. Samantha also praised Marshall coach, Tony Kemper, for his focus on family adding, “A lot of my family came from [this] family and my dad’s teams that were family, so that focus on family was important to me and coach made me feel like I was a part of something.”
Kemper’s focus on local athletes has a purpose LaFon revealed stating, “When you are from here it means something, and it means something when your family and friends are in the stands watching and holding you accountable.”
Samantha will add to her family’s rich basketball resume and look to earn her time for the Marshall Thundering Herd Women’s basketball team.
LaFon tore her ACL during the first game of her freshman year and missed the entire season.
She came back the next season and earned Division 3 All-Southeast all-district third team honors and was a first team all-district selection last season as Ironton reached the district finals.
LaFon capped the postseason by being named special mention All-Ohio.
LaFon also played volleyball and was a coaches’ first team All-District selection and was a named special mention All-Ohio.
She was also named to the coaches all-district first team.

Jim Walker jim.walker@irontontribune.com Leave it to Reid Carrico to do something like this. With all the accolades and success the... read more