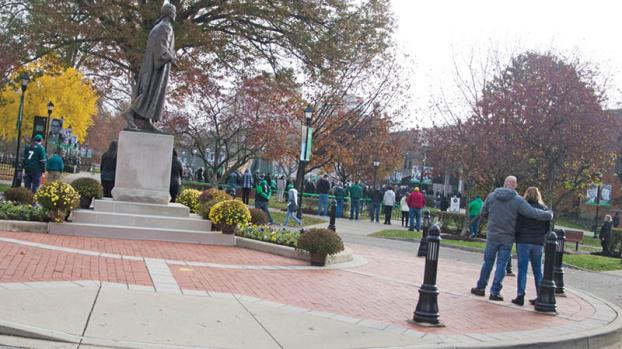 Marshall University hosted a ceremony marking the 50th anniversary of the Nov. 14, 1970 plane crash that claimed the lives of the school’s football team, along with community members, coaching staff and the plane’s flight crew. (The Ironton Tribune | Heath Harrison)

The school was hosting its annual service commemorating the Nov. 14, 1970 plane crash that claimed 75 lives, including players of the Thundering Herd football team, coaching staff, community boosters and the plane’s crew.

The flight was returning the team from a game against Eastern Carolina University. There were no survivors.

This year’s service, which marked the 50th anniversary of the disaster, was by invitation only due to the COVID-19 pandemic, but was live streamed to the public.

Opening the service was Michael W. Smith, a Christian contemporary star and inductee of the West Virginia Music Hall of Fame, who sang “Amazing Grace.”

He said the crash took place when he was 13 years old, growing up in his native Kenova, West Virginia.

Kautz, who was 45, was a Huntington resident and a Marine veteran of World War II and Korea.

He became Marshall’s athletic director in 1969 and had previously been a coach at Ironton and Rock Hill high schools.

“We each lost one or more family members,” said Call, the ceremony’s keynote speaker. “From that moment, we became one family.”

Marshall had hung banners throughout its campus prior to the ceremony, each featuring a photo of one of the 75 who perished on the flight as it attempted to land at Tri-State Airport.

Speakers at the ceremony spoke of the perseverance of the university, its athletic program and that of the surrounding community.

The football program at the school slowly rebuilt after the disastrous loss, eventually winning Division I-AA national championships in 1992 and 1996, as well as the most wins of any U.S. team in the 1990s.

Marshall honored the players lost in the crash earlier in the week, awarding each a posthumous degree.

Among the guests at Saturday’s ceremony were four players from Eastern Carolina University, who were among those who defeated Marshall in the game before the crash.

At Spring Hill Cemetery in Huntington, where six unidentified players from the team are buried in unmarked graves near a monument honoring the crash victims, people stopped by throughout the day, leaving items in tribute.

“From the ashes, we rose,” one handmade piece read, referring to the resurgence of the university, which served as the basis for the 2000 Emmy-winning documentary “Ashes to Glory,” followed by the 2006 film “We Are Marshall,” portions of which were filmed in Huntington.

“We Are Marshall” star Mathew McConaughey acknowledged the milestone anniversary of the crash on Saturday.

The Marshall crash occurred at a trying time in West Virginia’s history.

The disaster was one of four to strike the state in a five-year period, each with a high loss of life.

The Dec. 15, 1967 collapse of the Silver Bridge in Point Pleasant claimed the lives of 46 people, followed by the Nov. 20, 1969 Farmington Mine explosion, in which 78 workers died.

While, two years after the Marshall crash, on Feb. 26, 1972, the Buffalo Creek flood killed 125 people when a coal slurry dam failed and unleashed wastewater on surrounding communities.

(HUNTINGTON, W.VA.) —Gov. Mike DeWine made a visit to the Tri-State region Monday to discuss the recent spike in COVID-19... read more