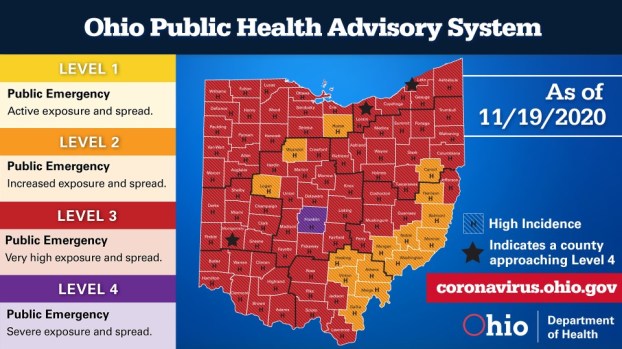 Lawrence among 72 of 88 counties at Red Level Three

COLUMBUS — An Ohio County has become the first in the state to reach Purple Level Four, the most severe designation on the state’s COVID-19 alert system, Gov. Mike DeWine said in his news conference on Thursday.

Franklin County, which covers Columbus, was listed Level Four on the new map issued by the Ohio Department of Health this week. It was the first county to get that designation since the four-tier system was implemented in the summer.

Lawrence County continued for a seventh week at Red Level Three, and neighboring Scioto and Jackson counties also share that designation. Gallia County was one of a shrinking number of counties, most located along the Ohio river in the southeast, to remain at Orange Level Two.

Altogether, 72 counties were at Red Level Three, the highest amount since the map began and an increase of five since last week.

“For the first time, we have a county that will be purple,” DeWine said. “This means they have flagged six or more indicators for at least two weeks. This is a sign that we are starting to see sustained impacts on health care services due to this disease.

DeWine said he expects others could be reaching that designation soon.

“While Franklin is the only county moving to purple this week, we see similar stories in much of the state,” DeWine said. “Our healthcare system is feeling the impact of this disease and hospitals are worried about being able to keep up with staffing of nurses and doctors and other support staff. We also have three other counties that are meeting as many indicators as Franklin. Since this is their first week meeting those indicators, they move to watch list status —Lake, Lorain, Montgomery. If trends continue, they could join Franklin as purple next week.”

DeWine pointed out that this was the first week that no counties in the state were listed at the lowest designation, Yellow Level One.

“This means all parts of the state are now at elevated levels of risk, even in our smaller or more rural counties,” he said.

The increase in severity and the release of the latest map follows DeWine’s announcement of a 10 p.m.-5 a.m. curfew for the state, which took effect on Thursday and will run for 21 days.

DeWine clarified the nature of the curfew in his news conference.

“We’re not looking for police to be out there pulling people over if they see them driving at night,” he said. “We should assume they have a legitimate reason for being out. But if police see people congregated somewhere while the curfew is in effect, they can ask them to go home.”

The governor urged residents to stay home, unless absolutely necessary.

“This is very, very serious,” he said. “We have to take this down. The reason why we haven’t issued a statewide shutdown is because of the ramifications of a shutdown. Everything we do during the pandemic is a balance. When we shut things down in the spring, we saw child abuse reporting going down, because teachers generally report abuse. We saw a spike in mental health problems. We saw a spike in overdoses — we think because people took drugs alone and there was no one there to call 911.”

He said a focus on personal responsibility is key.

“We know that Ohioans have it in their power to slow this down,” DeWine said. “That’s why we put an emphasis on personal responsibility. The big spread is coming from what people do in their personal lives when interacting with friends and family outside of their household.”