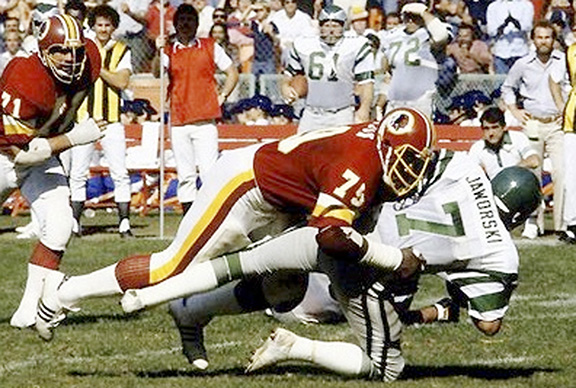 Now that Coy Bacon is a member of four Hall of Fames, maybe that will open the door to the biggest and most elusive of them all.
One of the greatest defensive linemen known for his ability to rush and sack the quarterback, Bacon was voted as one of the five new members of the 2021 Black College Football Hall of Fame.
“On behalf of the Board of Trustees, congratulations to the Class of 2021,” said former black college and NFL quarterback Doug Williams who is the co-founder of the Black College Hall of Fame and a 2011 inductee.
“It is a significant achievement to be considered one of the best to ever play or coach football at a historically black college and university.”
Bacon was selected from a list of 25 finalists. The other four players are Greg Coleman of Florida A&M, Jimmie Giles of Alcorn State, Winston Hill of Texas Southern and Rynell Young of Alcorn State.
Also selected was Willard Bailey who coached at Virginia Union, Norfolk State, St. Paul’s College and Virginia-Lynchburg College.
“Coy Bacon helped lay the foundation of Jackson State football,” said Jackson State vice-president and director of athletics Ashley Robinson. “Congratulations to the Bacon family and his legacy is now enshrined and will last forever.”
Born in Cadiz, Ky., but raised in Ironton, Bacon was a standout in football and basketball for the Fighting Tigers. His Kentucky birthright made him eligible for the Kentucky Pro Football Hall of Fame of which he was elected in 2013. He was also elected to the American Football Association’s Semi-Pro Football Hall of Fame in 1986.
Bacon — who died in 2008 — was a member of the inaugural Ironton High School Athletic Hall of Fame in 2013.
Bacon played at Jackson State from 1962-66 before playing semi-pro for the Charleston (W.Va.) Rockets of the Continental Football League where a scout for the Dallas Cowboys discovered his raw talents and signed him to the team’s practice squad in 1967.
After playing half the season on the practice squad in 1968, Bacon was traded to the Los Angeles Rams for a fifth-round draft pick. Trading a fifth-round pick for a practice player was considered unprecedented even for that era.
The Rams featured a defensive line nicknamed The Fearsome Foursome and included future Hall of Famers David “Deacon” Jones, Merlin Olsen, Roger Brown and Lamar Lundy. Brown sustained injuries in 1969 and Bacon was inserted into his spot in the lineup.
Lundy retired in 1970 and Bacon shifted to right defensive end the next three seasons and recorded 11 sacks in 1971 and was named second team All-Pro. He was also voted the Rams’ Defensive Lineman of the Year in 1971 and 1972 He was again second team All-Pro in 1972.
Needing a quarterback, the Rams traded Bacon and running back Bob Thomas to the San Diego Chargers for John Hadl. It was during the 1973 season that Bacon scored his only NFL touchdown with an 80-yard interception return.
Following the 1975 season, Bacon was dealt to the Cincinnati Bengals for wide receiver Charlie Joiner.
In was during the 1976 season that Bacon set and NFL record with 26 sacks. However, the NFL picked and sliced the sacks to 21 and a half. And since there were no sack records kept in prior seasons, the NFL did not officially recognize individual sacks.
Bacon was named to the Pro Bowl and second team All-Pro that season and was also voted the Bengals Most Valuable Player.
The Washington Redskins were in need of a pass rusher and traded a first-round draft pick for Bacon and defensive back Lemar Parrish prior to the 1978 season.
Bacon piled up 15 sacks in 1979 and 11 more the following season. He played two more seasons with Washington and then played the 1983 season with the Washington Federals of the upstart USFL.
During his 14 seasons in the NFL, bacon was a three-time Pro Bowl selections and a three-time All-Pro. Researchers credit him with 130 quarterback sacks during an era teams were run-oriented.
Despite his storied career, Bacon continually is overlooked for induction into the Pro Football Hall of Fame.
Bacon died Dec. 22, 2008, at the age of 66.

Indiana hoping to finally offer a challenge to Buckeyes

COLUMBUS (AP) — Back when the schedule was assembled, a mid-November game between perennial power Ohio State and middling Indiana... read more