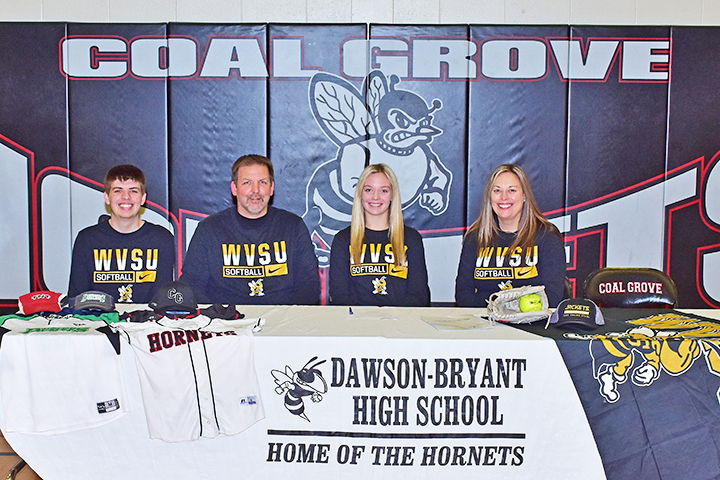 COAL GROVE — Addi Dillow signed a letter-of-intent on Thursday with the West Virginia State Yellow Jackets.
Oh, it was for softball even though it could have been for basketball. Or volleyball. Or track. Or maybe even mountain climbing.
The Coal Grove Lady Hornets’ all-around senior athlete has had plenty of success in all the sports she has participated which made for an interesting map to her future.
In middle school, she was the only five-sport female athlete and earned the OHSAA Archie Griffin Sportsmanship Award.
In high school, she was All-Ohio Valley Conference in volleyball and eclipsed 1,000 career kills as she earned all-district honors as well.
She was first team All-OVC in basketball, softball and volleyball as a sophomore as well as the Coaches District 13 basketball and volleyball teams. Dillow also earned All-Ohio honorable mention honors in basketball that season.
During the spring of her sophomore season, Dillow was part of the Lady Hornets’ first-ever OVC track championship team.
Next came her junior year and the honors continued to pile up.
She was first team All-OVC in volleyball, basketball and softball once again. She was a Coaches’ District 13 first team selection and a Southeast All-District first team pick by the prep sports writers that earned her All-Ohio special mention.
During her junior season, she racked up her 1,000th career point and helped the Lady Hornets to an outright OVC basketball title.
Whew!
Dillow talked to numerous schools about basketball, but softball is where her true heart kept beating.
The list of potential schools was longer than a grocery list for Dillow and included a lot of NCAA Division 2 schools such as Glenville State, University of Charleston, West Virginia Wesleyan and Concord.
But Dillow finally settled on D2 West Virginia State for several reasons.
“Well, obviously, it’s really close to home, I have a few friends who are going there and who are already there. It just kind of felt like home. The minute I stepped on campus I said this is where I want to be. The softball program is really nice and it was just really fun to be around, the coaches and some of the teammates I met.”
Dillow’s all-around athletic ability has allowed her to play several positions very adroitly which drew the attention of the Yellow Jacket coaches.
“I’m listed as a utility player right now. I do play outfield for my travel team but I play infield for Coal Grove, so it’s just wherever they want me or wherever they want to put me,” said Dillow with a laugh.
Lady Hornets’ coach Wayne Kellogg said Dillow is an outstanding all-around athlete who can play virtually any position on the softball field, but he said her impact goes beyond the physical skills.
“She’s definitely our leader the last two or three years. Even her freshman year stepped in and was one of the leaders,” said Kellogg.
“I think she’ll play a lot of outfield for (West Virginia State). I think she’ll start in the outfield. If I had another shortstop, she’d be in my outfield because she’s fast. She can track down a ball and she’s really good at shortstop, too.”
She can hit, too.
Dillow battd .413 as a freshman, and then .495 as a sophomore with five home runs, 13 doubles and 20 runs batted.
Those numbers helped earn her All-OVC honorable mention as a freshman and first team All-OVC and District 13 honorable mention her sophomore year.
Signing before softball season arrives eases some emotional pressure for Dillow.
“It’s an advantage not to have to worry about making every play. I’m still going to try and do that, but it takes a lot of weight off my shoulders to say I’m committed. It’s just good to know,” said Dillow.
“I have to go in and get better and get stronger. I don’t know about playing time. Just being there and getting on the field and practice and getting better is all I’m hoping for right now,” said Dillow.
She also helped Coal Grove to a share of the Ohio Valley Conference title as a sophomore and then the Lady Hornets before winning it outright last season.
“This is my last year, so we want to win (the league) again,” said Dillow. “We want to go deeper in the tournament. So far, we’ve had a two-game limit all three years that I’ve played, so we want to get past two or three games this year.”
The Lady Hornets were 17-12 during Dillow’s softball season but the COVID-19 erased all of the spring sports last year. Dillow likes the team’s chance this season.
“I think we have a good shot to try and win an OVC this year. Obviously, Keegan Moore at Ironton pitching is probably the biggest pitcher that we’ll have to face.
With a 3.9 grade point average, Dillow said she currently did not have a major but was leaning toward nursing.