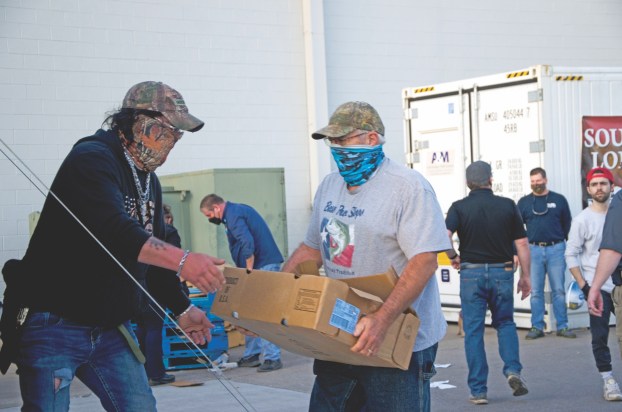 Volunteers and members of the South Hills Longbeards chapter of the National Wild Turkey Federation distribute turkeys to charitable groups throughout the Tri-State on Thursday. (The Ironton Tribune | Heath Harrison) 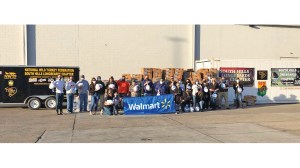 Volunteers and members of the South Hills Longbeards chapter of the National Wild Turkey Federation stand outside South Point Walmart on Thursday after distributing turkeys to charitable organizations across the Tri-State. (Submitted photo)

SOUTH POINT — On Thursday, members of the South Hills Longbeards chapter of the National Wild Turkey federation gathered at Walmart in South Point, along with volunteers, as they do each year, to distribute turkeys to those in need.

The group hopes to raise the spirits of needy families in the community by providing the frozen turkeys for Thanksgiving and Christmas dinners by participating in the NWTF’s Turkey Hunter’s Care Program.

Volunteers distributed 1,050 frozen turkeys on the parking lot behind the store to recipients including local churches, food banks and other organizations, such as Neighbors helping Neighbors, Backpack Buddies, Lawrence County’s “Shop with a Cop” program, Citizens of Burlington and several more.

Last year, the chapter’s third year participating in the Turkey Hunter’s Care Program, they donated 850 frozen turkeys to local churches and food banks and organizations. The local chapter has donated 2,415 frozen turkeys since they started the program in 2017.

The chapter volunteers raised over $10,000 by selling gun raffle tickets and hosting their Turkey Hunter’s Care 3rd Annual Gun Bash on Sept. 12 at the Knights Of Columbus in Ironton.

The chapter is always in search of other business or companies to partnership with in this program to give back to those less fortunate during the holiday season.

The group thanks everyone who purchased Gun Bash tickets and supported the Annual Turkey Hunter’s Care Program in 2020.

Their 2020 Turkey Hunter’s Care Gun Bash will be announced on the chapter’s Facebook page at NWTF South Hills Longbeards and the chapter’s website at www.southhillslongbeards.org.

Anyone interested in getting involved with this program is asked to contact chapter vice president and Turkey Hunters Care Coordinator Bill Mullins at 606-232-6618 or email southhillslongbeards@gmail.com.

The NWTF is a nonprofit 501 C-3 conservation organization that works daily to further its mission of conserving the wild turkey and preserving hunting heritage. Through dynamic partnerships with state and federal wildlife agencies, the NWTF and its members have helped restore wild turkey populations across the country, improving more than 17 million acres of wildlife habitat and introducing 100,000 people to the outdoors each year.

Small Business Saturday in downtown Ironton is this weekend, but like every event this year, it is going to be... read more