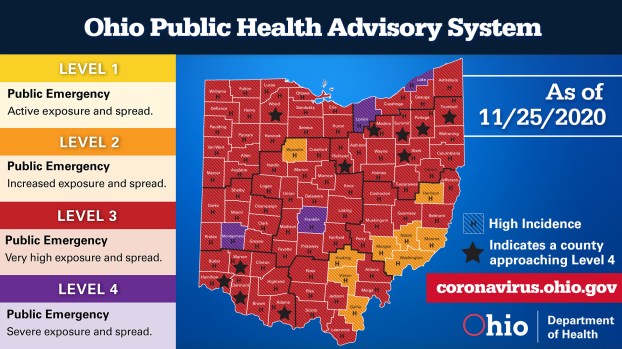 COLUMBUS — Four counties in Ohio are now listed at Purple Level Four in the latest update of the state’s COVID-19 alert map.

Montgomery, Lake, and Lorain counties moved to the highest risk level on the four-tier system, while Franklin County remained at the designation for the second week.

The newest Level Four counties are among the most populated in the state. Montgomery County is the fifth-most populous county and is where Dayton is located. Lake and Lorain counties are part of the greater Cleveland metro area. While Franklin is the Columbus area.

In addition, 11 counties at Red Level Three have moved to the watch list in the system.

This week saw 75 counties were at Red Level Three, an increase of three from last week.

No counties were at the lowest alert, Yellow Level One.

He urged Ohioans to not hold large celebrations, due to the pandemic.

“Be safe,” he said. “Celebrate small.

When it filed for bankruptcy last year, Purdue Pharma agreed to an innovative plan: It would make $200 million available... read more