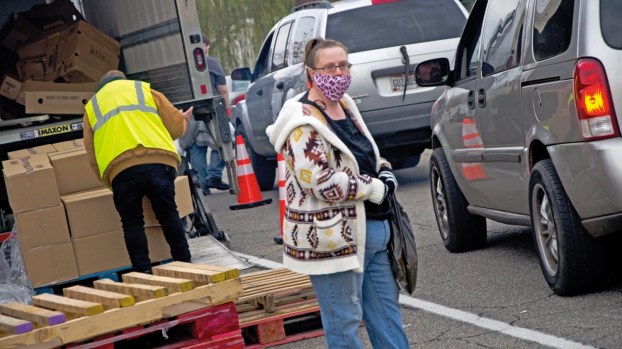 Volunteers with Harvest for the Hungry take part in a drive-through food Thanksgiving giveaway on Tuesday. (The Ironton Tribune | Heath Harrison)

Harvest for the Hungry distributes food to hundreds for Thanksgiving

Harvest for the Hungry food pantry director Diane Porter said cars began lining up four hours ahead of the start of their Thanksgiving food giveaway on Tuesday.

“We planned for 500,” she said, stating that they knew demand would be at a much higher level this year, due to the economic conditions surrounding the COVID-19 pandemic.

Typically, the event takes place each year at the food pantry, located on North Fifth Street in Ironton, but, due to social distancing needs, the pantry opted to set up a drive-through pick up for those in need, using First Church of the Nazarene on South Fourth Street as the site.

Porter said the line of cars prior to the start filled the adjacent lot.

Those who showed up and presented an ID and proof of Lawrence County residency received a box containing ingredients for a meal that could serve four to six people., including a 12-14 pound turkey, mashed potatoes, gravy, stuffing, green beans, cake mix and other items.

Four hours after the event’s start and with an hour to go, the crowd had thinned, but cars were continuing to come through at a regular pace. A small group of volunteers would load the boxes in the cars.

Porter says many churches, businesses and individuals make the event a success.

Some of those included First Presbyterian Church of Ironton, who donated 240 boxes of stuffing, Impact Church, The Nazarene Church, who, in addition to the use of their premises, contributed $1,000, and Mi-De-Con, who Porter says is a regular contributor.

The South Hills Longbeards chapter of the National Wild Turkey Foundation also donated 125 frozen turkeys. The group was at South Point Walmart the previous week, where they had given more than 1,000 turkeys to charitable groups across the Tri-State.

Among those who helped with the distribution on Tuesday were former Ironton Mayor Katrina Keith and Kimbala Gabbard, pastor of Impact Church in Ironton.

The food pantry has operated since 1992 using contributions and donations to help Lawrence County families in need throughout the year.

Porter said the need will only grow in Lawrence County in coming months as federal stimulus money from the COVID-19 relief legislation has run out.

In the eastern end of the county, preparation is underway for another long-running charitable effort.

The Chesapeake Community Mission Outreach is organizing for its annual giveaway, which draws hundreds to the former high school for the village, now home to its community center. That event typically takes place in the week before Christmas.

Family members recall experience of losing loved ones to COVID-19 EDITOR’S NOTE: This week, daily deaths in the U.S. from... read more