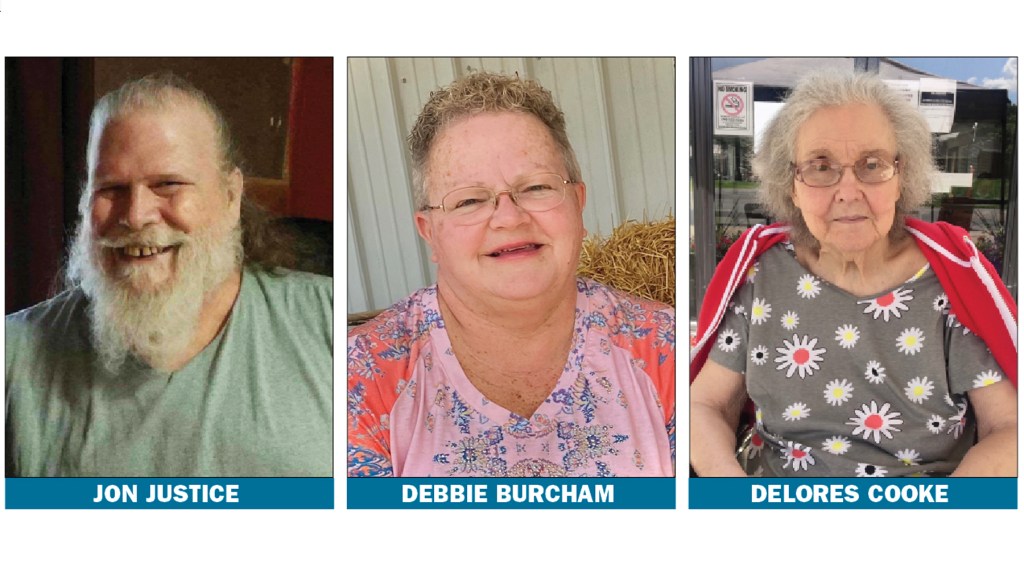 Family members recall experience of losing loved ones to COVID-19

EDITOR’S NOTE: This week, daily deaths in the U.S. from the COVID-19 pandemic surpassed nearly 2,000, the highest daily amount since May. As holiday travel comes and winter arrives, medical experts expect cases and deaths to continue to spike. To date, more than 230,000 American lives have been lost to the virus, including, as of Friday morning, 40 in Lawrence County. Behind each of these numbers is a name and family and friends who are still mourning. The following accounts tell the story of some of those lost in our region.

“Protect your families, it’s very serious,” Coal Grove resident Renee Justice said after losing her aunt and husband of 26 years to COVID-19. “It will destroy your family.”

Renee said the Lawrence County Health Department called early morning, around 8 a.m., on July 28 to inform her she had been exposed to the novel coronavirus.

Justice says the health department told her she was exposed three days earlier at her home, which was the same day an EMT worker was inside their home.

From there, the panic and worry began.

After a long evening on July 25 of her aunt, Ethel Johnson-Webb, battling vomiting and bowel movements, Renee called EMS. When the EMTs arrived, she said she noticed that one worker looked “really super tired” and “worn out.”

Later that night, Ethel was admitted to the hospital because she was dehydrated, her heart was out of rhythm and she had a bad bladder infection. Saturday and Sunday passed and,

by Monday, Ethel was cleared to go home. Renee said Ethel was “tickled to death” to return home after spending the weekend in the hospital.

Ethel suffered from dementia and sundowners, feared the dark and didn’t like to be alone. Renee describes Webb as a “happy person,” who loved trees and ice cream and loved to “sit on the porch and watch the neighbors.”

Ethel, 87, the widow of Leo Webb for 30 years, was exposed the same day as Renee. After receiving the call from the health department, Renee said “the testing began.”

When the health department called early in the morning on July 28, “I woke up with a raspy voice and pressure on my chest,” Renee said. “I didn’t expect any of this.”

In the following days, Renee found out she tested positive for COVID-19. She recalled the terrible migraines and body aches like no other and says the headaches made her eyes hurt for four days straight.

Ever since she received her taste and smell back, things haven’t smelled the same, she said. 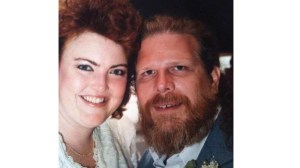 Renee Justice, of Coal Grove, is seen with her husband, Jon. He died from COVID-19 on Aug. 12. Renee, who tested positive, also lost her aunt, Ethel Johnson-Webb, to the novel coronavirus on Aug. 13, and said the pandemic has destroyed her family. (Submitted photo)

While Ethel was experiencing weakness and flu-like symptoms, Renee’s husband Jon J. Justice’s symptoms were just a fever and cough after testing positive on Aug. 7. He was admitted to the hospital because of trouble breathing.

Renee tearfully described her worry while not being able to be at the hospital and comfort her husband.

“It’s like your worst nightmare,” Renee said. “What’s going on, who’s taking care of him? Is he okay? Does he need something? Do I need to pray with him? What’s going on!”

On Aug. 12, after spending three days in the hospital, Jon J. Justice died from complications with COVID at the age of 61. He was initially exposed on July 27 by Renee.

“I was exposed and didn’t know it,” she said. “I went to see my husband and took him some dinner; I hadn’t seen him all weekend. I was in the hospital with my aunt. I got home that Monday (July 27), I kiss my husband, tell him I love him and that’s the last time I saw him alive.”

Renee says Jon had COPD, was on oxygen, was obese and had diabetes. Justice describes her husband as a “big teddy bear” who was a good man. She says that he was strong, and she didn’t think COVID-19 would take him away from her.

“Just make him comfortable,” Renee said she replied to the doctor as she was told he was dying.

“I’m very thankful, I deeply thank her for holding his hand and I hope it was easier on him,” Renee said, adding she doesn’t know who the doctor was, but thanks her for being with him as he passed.

Renee says she misses her husband and aunt and hopes no other family has to go through a nightmare like this.

Stephen Dale Burcham was 17 and his future wife, Debbie, was 15 when they fell in love. They got married two weeks after Debbie turned 18.

From there, the Proctorville couple spent the next 43 years together, until COVID-19 took her away.

Ever since COVID-19 was declared a pandemic by the World Health Organization in March, Stephen Dale said he and Debbie had been masking up, social distancing and practicing frequent handwashing and sanitizing.

On Thursday, Oct. 15, Debbie went to the doctor to get a mammogram. That evening, her chest began to hurt and she took notice.

“As Friday, Oct. 16 came along, her breathing became worse,” Stephen Dale said. “She felt like she had a headache — thought she was coming down with the flu.”

On Sunday, Oct. 18 Debbie and Stephen Dale went to Kings Daughter’s Burlington Family Care Center, where she was tested and came back positive for COVID-19 on Monday, Oct. 19.

Debbie was sent home and told to get plenty of rest and fluids, and to monitor her oxygen level, and that’s what she did.

On Thursday evening, Debbie’s oxygen levels dropped dramatically, and she was taken to St. Mary’s by her husband, where she was admitted on Oct. 22.

Stephen Dale says he spoke with her on Friday and it was evident to him that her breathing was more labored. In the short time from that Friday to Saturday, her breathing worsened further and, on Saturday evening, Debbie was sedated and put in the ICU on a ventilator, where she would remain for four days. 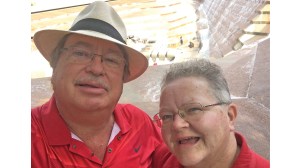 “They were good enough to let me call in and they would hold the phone up to her ear,” he said. “Even though she was sedated, I was hopeful that she heard me talking to her. I talked about the kids and the grandkids. Her children and her grandchildren always cheered her up.”

Stephen Dale says Debbie was given a few experimental drugs and her vitals remained consistent, but didn’t show any improvement. On the following Thursday night, a little after 9 p.m., Stephen called and was told Debbie’s fever had spiked.

About two hours later, the nurse called Stephen back and said, “Your wife is taking a turn for the worse and I’m going to go work on her now.”

“An hour and 45 minutes pass by, and I called back and got a different nurse at the station,” Stephen Dale said.

The second nurse answered and said, “The nurse is still in there working on your wife and I will have her call you in just a few minutes.”

About five minutes later, Burcham says the second nurse that he talked to called him back and said, “Your wife has just coded, and we’ve called for a crash cart.”

At that moment, Debbie was receiving CPR. Fifteen minutes later, he received a phone call from the nurse again and they told him they got her back, but she coded again, they asked if he wanted them to try again.

Stephen Dale asked them to try again, but it was too severe. He and his two daughters were together when they received the news at 1:30 a.m. on Friday that their beloved wife and mother had died.

He described Debbie as an introvert.

“She was always mine and my daughters’ biggest cheerleader, she was constantly in the background supporting us,” Stephen Dale said. “Her character was unblemished. She had the highest morals and integrity. She treated everyone as if they were part of our family.”

He advised others to take the situation seriously and follow the health guidelines.

“It’s more than just us, we have to pull together to fight this virus,” Burcham said. “Wearing a mask shows patriotism, and wearing a mask saves lives.”

Delores Cooke
“I hope, with everything in me, that nobody else will have to go through what my family went through for their eyes to be open,” Allison Parker said. “No one should have to know that their grandmother died without their family there beside them.”

Delores Cooke, who beat cancer twice in her life, died Monday, Aug. 17 from COVID-19. She was 87 years old and a resident of Harbor Healthcare of Ironton.

Parker described Cooke as a joyful, loving person who loved to sing and watch football.

“She loved her kids, grandkids and great-grandkids,” she said.

Cooke was also known for her strong faith in God. Those who knew Cooke know of her “unwavering, unyielding faith in Christ.”

According to her obituary, in her final years, she would often say that her job was to sit quietly and pray for others. 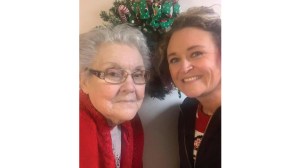 Delores Cooke, 87, a resident of Harbor Healthcare of Ironton, is seen with her granddaughter, Allison Parker. Cooke died from COVID-19 on Aug. 17. (Submitted photo)

Parker said she went to bed early and missed a text from her aunt that said, “Grandma’s in respiratory distress, they’ve had to take her to the ICU.”

Cooke was tested for COVID-19 after complaining that she was “really tired.” The next day, “she went from talking to the nurses, eating and doing normal things to that night, around 10 p.m., going into respiratory distress,” Parker said.

“Within 24 hours, my grandmother was pronounced dead,” she said. “It was unbelievable. None of us got to say good-bye.”

“She was in the nursing home and died without her family at her side,” Parker wrote of Cooke in a Facebook post. “She is the reason I am a special education teacher.”

In a final plea to the residents of Lawrence County, Parker says, “we must come together” to defeat this virus.

“I go to work, I wear my mask and take every precaution that I can take,” she said. “I hope to God people realize this isn’t going away.”