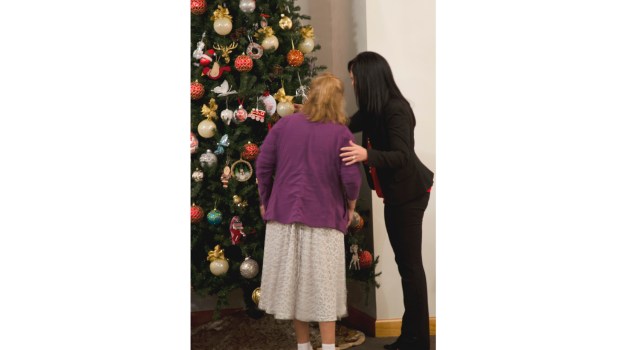 Ornaments are placed on the Tree of Life to remember those who have passed during a ceremony at Hall Funeral Home in Proctorville in 2016. This year, the event will be held online because of the pandemic. (Heath Harrison | The Ironton Tribune)

For more than two decades, the Hall Funeral Home in Proctorville has had a remembrance ceremony in December for families to honor the relatives and friends they have lost.

In the past, the ceremony has been held at the funeral home. This year, their 21st Remembrance Service is being held virtually startingat noon on Friday.

Ernie Hall III started the ceremony after the funeral home moved into their current location in 1999 to do something for the families they serve, especially at the holidays when the loss of someone is extra emotional.

Normally, the funeral home has the event in their building with a Christmas tree and they give angel ornaments for people to put on the tree in honor of their loved ones.

“We would have around 300 people show up for the remembrance and then we’d have refreshments,” Hall said.

With the pandemic this year, that wasn’t a workable idea, so they went with putting the event online.

“This way, it can be watched anytime,” Hall said.

The format will be basically the same.

“We will have a couple people speak to try and give good information about coping with grief during the holidays,” Hall said. “We have a couple songs.”

As part of the event, a list of names will roll on the screen, including the names of loved ones that had funerals at Schneider Funeral Home, which the Hall family recently bought.

“We just thought that this is the best way with everything going on to protect people and let them remember,” Hall said.

The event will be on www.ehallfuneralhome and on their Hall Funeral Home Facebook page.

Hall said that the event means a lot to him because he lost his father and his grandparents in the last seven years, his brother, Evan, lost his mother-in-law this month and on Tuesday, Hall attended the funeral of one of his friends.

“As long as we can, we are going to continue this Remembrance Ceremony,” Hall said.

He added that he hopes next year, the situation will be better and they can hold it in person again.

“This year, this is the best we can do given the circumstances, but next year, we would like to return to what we’ve done before,” Hall said. “It is a good time of fellowship, but unfortunately we can’t do this year. It means a lot to our whole family and I think other families appreciate it.”