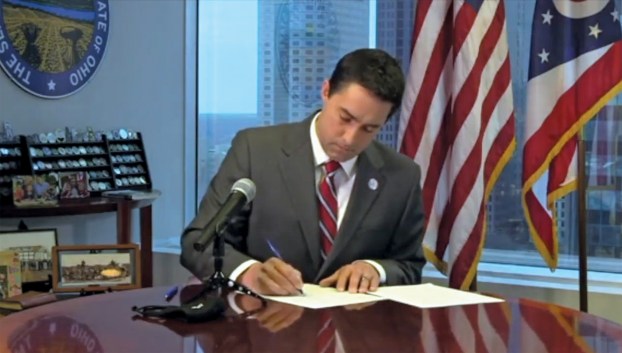 Ohio Sec. of State Frank LaRose signs and certifies the results of the Nov. 3 presidential election on Friday. (Submitted photo)

LaRose says voting was more secure and accessible than ever

LaRose’s signature marks the completion of the official canvass and certifies winners in the 2020 General Election.

Data was collected by the Ohio Secretary of State’s office from the official canvass conducted and submitted by Ohio’s 88 county boards of elections.

The Secretary of State conducted a precinct-by-precinct review of the data prior to certification. A list of all 88 county boards of election is available by clicking here.

LaRose said it was the state’s most accessible and secure election ever.

The record 74 percent turnout surpasses the average of the presidential general election average from 2000-2020 of 65 percent.

LaRose said, “despite partisan fearmongering,” voting by mail was reliable.

His office said he worked closely with the United States Postal Service to provide for the successful delivery of election mail throughout the election.

While he did not amass the 270 electoral votes nationally to be re-elected, President Donald Trump carried Ohio, 53.3-45.3 percent over former Democratic Vice President Joe Biden, winning the states 18 electoral votes.

Biden’s national win marks only the third time in 75 years that a presidential victor has won without carrying Ohio, which has long been considered a bellwether state.

At noon on Dec. 14, the members of Ohio’s Electoral College will gather in the Senate chamber of the Statehouse to cast their electoral votes for president and vice-president. This occasion marks the 55th meeting of the Ohio Electoral College since statehood in 1803.

Counties will continue the post-election audit process, further ensuring Ohioans have faith in the integrity of the electoral process and that every valid vote is counted.

Pepper had been in position since 2014 CINCINNATI (AP) — Ohio’s Democratic Party chair is stepping down after six years... read more