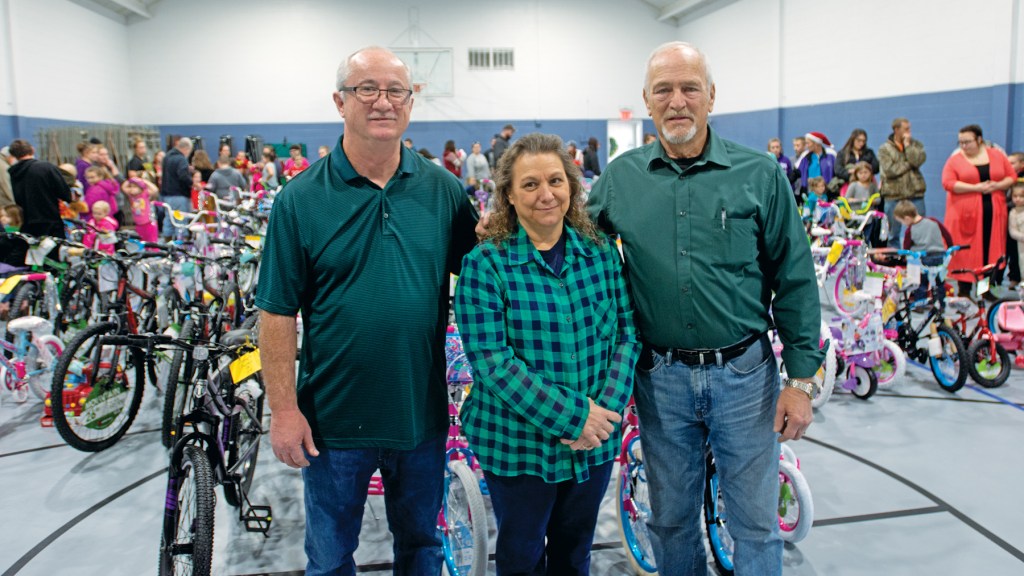 With donations down, less kids to receive bikes

For nearly a decade, John Dickess, owner of Dickess Auto Repair, and Don Schwartz, manager of Advance Auto Parts in Ironton, have been making sure needy kids get the big present of receiving a bike for Christmas.

Like most things in 2020, it’s been different when it comes to setting up their annual bike giveaway. Throughout the year, the two men gather donations from the Lawrence County community to get bikes for as many kids as they can.

And usually, they have a big party with pizza and other little gifts for the kids in a church gym. This year, that obviously can’t be done in a safe way.

“Everything has been different this year, so we are pulling names and we are doing it down here at the shop,” Dickess said. The giveaway will be Dec. 18 at 4 p.m.
Dickess and Schwartz began the bike giveaway in 2011 and try to give out between 150-200 bikes.

Dickess said that they aren’t going to be able to give away as many bikes this year as they have in the past. They have a list of names they are going to try to fill.

“We’re just going to do what we can and go from there,” Dickess said, adding donations are down this year. “We can’t help everyone, but we are going to try. I think donations are down because people are unemployed. We have a lot more people that are calling in. Things are tough right now.”

They are looking for individually wrapped candies to give away as well as donations of bikes, specifically six 26-inch bikes, or cash so they can buy more bikes.

He said he didn’t know if the prices were up because of the effects of COVID-19 or just because there isn’t as much competition, so Wal-Mart is charging more.

“But we are going to do what we can,” he said. “And if people can give, we do need more big bicycles.”

Right now, they have about 60 bikes and Dickess is expanding his search by going online and checking out if local people are selling them.

Instead of being in a gym, people will line up on the sidewalk outside Dickess Auto Repair. Kids will get a little gift and then they will go into the parking lot behind Auto Zone to get their bike.

“It’s a little disappointing to have to do it that way, but we normally have a couple of hundred people in a room for the party. We can’t do that this year.”

Dickess said the reason for getting bikes for kids for Christmas because when he was young, he thought getting a bike was “the greatest thing. And a lot of people, they can buy smaller gifts, but they can’t buy bigger gifts. And we are just trying to get the boys and girls the bigger gift for Christmas.”

And long before Dickess was repairing cars for a living, he was working on bicycles. He would buy a beat-up bike, fix it and then sell it to another kid.

“I’d have five or six bicycles at a time, always working on them and fixing them up,” he said. “I’d let other kids ride them in the annual Christmas parade. So, this is something I’m fond of.”

After bikes, he learned to repair lawnmowers and then “the next thing you know, I’m working on cars,” he said.