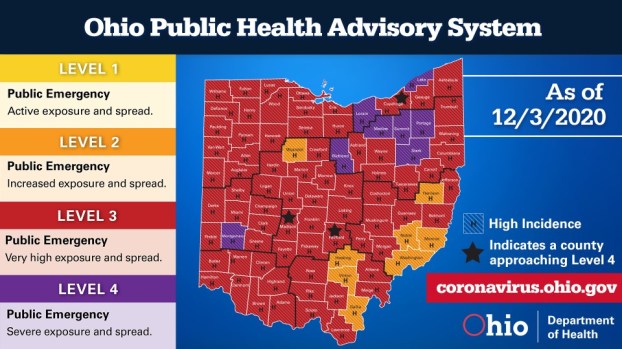 Three counties at Red Level Three, Cuyahoga, Fairfield and Madison — were designated to the watch list for conditions that could lead to a Level Four designation.

One county that was listed at Level Four last week, Franklin, which covers the Columbus area, had been downgraded back to Red Level Three.

“Franklin County has gone from purple to red, but this does not mean that Franklin County is out of the woods,” Dr. Andy Thomas, of The Ohio State University Wexner Medical Center, said

“We still have a rate of cases that is 6x higher than the definition of high incidence. That is not good. We are not on our way down yet.”

Thomas said the state has yet to see the impact of Thanksgiving travel and gatherings on hospital numbers.

He said Ohio is now heading into what will be the three most challenging months of the pandemic.

“ICU beds are the area of capacity where we have the biggest strain across the state – especially in rural areas,” Thomas said.