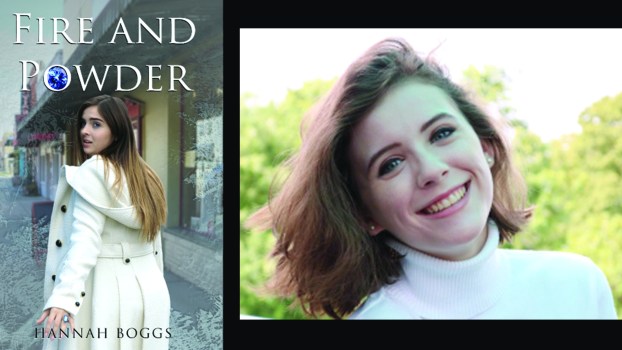 HUNTINGTON, W.Va. — A South Point native has released her second book, the next installment of a planned trilogy.

Hannah Boggs, 19, completed “Fire and Powder” late last year and is now offering it through online bookstores and her website, www.hannahboggsbooks.com.

It is the follow-up to “Violent Delights,” written when she was 16, and which was the winner of the 2019 award for Best Paranormal Book from the Indies Today Awards.

“Fire and Powder” continues the plight of Odette Sinclaire, a teenager trapped in a relationship by supernatural circumstances.

“Every day she must face the fear and torment of what has and will happen if she were to try to escape,” a press release for the book states. “A twist of fate changes her situation and she must come to terms with what happened and how she can move forward. But to what level does she endanger those around her? Grayson, Odette’s husband, and his sister, Greer, seek to retrieve her for different reasons, leaving chaos and destruction in their wake. After Odette learns the nature of her power, she must confront the magical twins in a battle she is woefully unprepared to fight.”

Both of the books draw their titles from William Shakespeare’s “Romeo and Juliet.”

Boggs, a graduate of the online school Ohio Connections Academy, currently attends Marshall University. She is the daughter of Janette and David Boggs, of South Point.
Boggs’ first effort earned her strong reviews. Always interested as a child, she said she began writing seriously in middle school.

The series, which she describes as “supernatural thriller,” originated when she had to withdrawal from St. Joseph Catholic School for health reasons.

“The first book came to me around the time I got sick,” she told The Ironton Tribune last year. “I was venting my frustrations and really felt isolated. I put it into words and turned it into a story.”

Boggs eventually enrolled in Ohio Connections Academy, where she was an online ambassador for the school and spoke at the Ohio Statehouse.

When her trilogy is completed, she said she plans to continue writing, branching out into other genres.

Boggs has also sold her work, for which she also takes the cover photographs, locally at stores like The Inner Geek in Huntington.

More information can be found at www.hannahboggsbooks.com.

Four days set in February for Reed in Common Pleas A trial date has been set for a Pedro man... read more