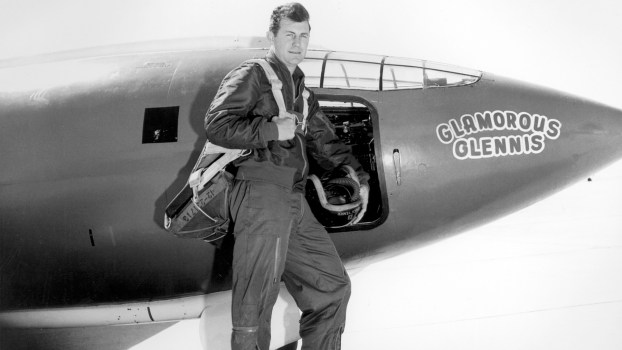 Famed aviator Chuck Yeager is seen in front of the Bell X-1, named Glamorous Glennis, in the 1940s. Yeager, a native of Lincoln County, West Virginia and the first pilot to break the sound barrier, died Monday at age 97. (U.S. Air Force photo) 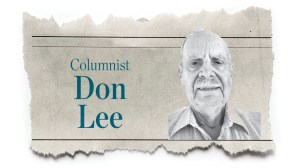 Since Chuck Yeager died on Dec. 7, 2020, at 97, I must write about him, although you may have read some of my stories before. Repetition is good for the memory.

Chuck Yeager was quite a character.

He has had some close calls and he survived all of them by being a very skillful pilot besides having a little good luck.

Back when I was an active member the Air Force association and as one of the few enlisted men in the association, I was asked to arrange for Chuck to attend and speak at the inaugural meeting of the Chuck Yeager Chapter of the Air Force Association.

Someone in the group knew that he was coming to Huntington, West Virginia, to promote the Boy Scouts. I was able to find his address in California and I wrote him a note inviting him to the meeting.

Surprisingly enough, he wrote back in his own handwriting to accept.

That was back in the days before he garnered a lot of publicity with his Delco commercials.

I arranged for the meeting at the Uptowner motel, which at the time had a large meeting room which we could have if we had a dinner there also.

I had been taking Col. Bill Lambert to the Air Force meetings before it was named. I called him and asked if he would like to attend the meeting and, of course, he said yes. He asked if he could bring some of his 35 mm slides of his pictures he had painted.

I told him I would ask Chuck, which I did, and he said sure, Bill would be welcome to say a few words.

I feel sure that most of them had never seen a WWI ace, let alone hear one speak.

Col. Bill was credited with 22 combat victories while he was flying for the Royal Flying Corps which later became Royal Air Force.

Of course, Gen. Chuck was flying for the Army Air Corps, which later became the Air Force. He was credited with 11.5 or 12 combat victories depending on what source you believe.

He had the singular achievement of becoming an ace in one day, having destroyed five aircraft.

He is credited with two victories without firing a shot.

He surprised one enemy pilot which caused him to turn sharply and run into his wingman. Both went down, but parachuted to survive.

I introduced Lambert and he took off telling about his combat experiences and showing the slides. That was back in the days when there was a Kodak Carousel and a projector.

Col. Bill rambled on and had the rapt attention of everyone, including Gen. Yeager.

It was very interesting, but I was becoming a bit embarrassed since Chuck was supposed to be the featured speaker.

I finally asked Col. Bill to wrap it up and give Yeager a chance to speak.

I introduced Yeager and he said, “Don, you expect me to interest your members by telling them about the Air Force mission in Pakistan after that?”

Anyway, I’ll bet Gen. Chuck never forgot that and neither have I.