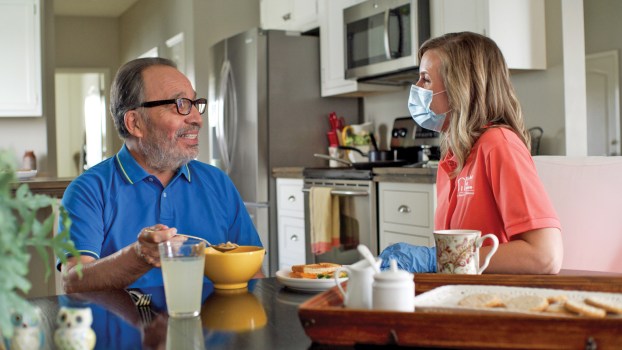 Right at Home, an at-home care provider, has seen an increase in clients for its services as the COVID-19 pandemic has progressed. (Submitted photo)

Owner of local business says industry has been growing

With the COVID-19 pandemic still spiking, at-home care for seniors has seen a rise, with many considering the option as alternative to nursing homes and assisted living facilities.

Erick Hicks has been the owner of Right at Home in Ironton, a local franchise of the company, which operates in 400 locations in the U.S. Hicks also operates facilities in Huntington, Charleston, Beckley and Princeton, West Virginia.

He said his facilities, which employ 350 caregivers, have had a 10 percent increase in clients this year.

“We’ve seen an increase, during the pandemic, in those we are serving,” he said. “Many don’t want to go to congregate living.”

Hicks said many family members are concerned about the limits on visitors during the pandemic at most nursing homes, as well as the risk of exposure from other residents and large staffs.

“They prefer at-home care, where it’s one-on-one,” he said.

He defines personal care as meeting the needs of someone who needs help with things such as dressing, bathing, incontinence and anything that in which a caregiver makes contact and the work requires touch.

Companion care, he says, is when a caregiver is in the home and takes care of things such as light housework, transportation and meal preparation.

“We provide assistance in the Tri-State in both areas,” he said.

As far as the needs during the pandemic, Hicks said all caregivers have been required with personal protective equipment, such as gloves and masks.

“And they have been trained on infection control and understanding the coronavirus,” he said, stating they have been awarded certificates for training that began in June.

“So we feel confident sending people into homes,” he said.

While Hicks has been hiring more caregivers this year, he said his client base has been growing, even before the pandemic, something he expects to continue in years to come.

He notes that life expectancy is increasing and the youngest of the Baby Boomers, a sizeable percentage of the population, are now 75 and beginning to require care.

He said, for many, the idea of at-home care is more appealing than going into a larger facility.

“They feel like it’s safer and many just want to be home,” he said. “If we can facilitate that, it’s great.”

DeWine: Next few weeks most critical