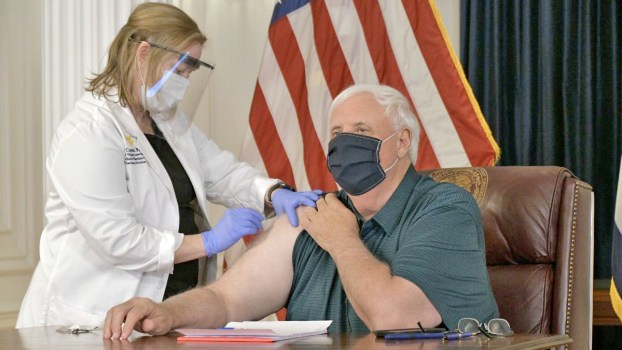 West Virginia governor is among first to get vaccine

CHARLESTON, W.Va. (AP) — West Virginia Gov. Jim Justice became one of the first top elected officials in the country to receive a coronavirus shot on Monday evening, saying “it’s as safe as can be.”

He and aides received the injections even though the state’s rollout is supposed to prioritize giving the highly sought-after doses to health care workers and people in long-term care centers.

“Don’t hesitate, you’ve got to get this vaccine,” the 69-year-old Republican governor said at the statehouse room where he hosts regular news conferences. Wearing a mask, he received a jab in his right arm from a state pharmacy board official and promptly received an adhesive bandage — and a sticker. Four other top state officials, including the health officer and head of the National Guard, next rolled up their sleeves and also received shots live on camera.

West Virginia officials say they want to demonstrate their confidence in the vaccine, but many other governors are waiting for health care workers, patients and emergency responders first. It could be months before the general public has access to a vaccine.

In Utah, Gov. Gary Herbert, 73, and his soon-to-be successor have dispelled rumors that political leaders will receive vaccine favoritism. The 61-year-old Republican governor of Tennessee, Bill Lee, recently said he will take the shot when it is “available to the folks in my population sector.” And the governors of Ohio, Missouri, Montana, Nebraska and Washington similarly have said they will wait for their turn.

Washington Gov. Jay Inslee “is not jumping ahead of healthcare workers,” a spokesperson told The Associated Press in an email Monday morning.

The White House had recently been planning to vaccinate top government officials, but officials reversed course Sunday after receiving criticism that they were cutting in line ahead of essential workers and nursing home patients who are awaiting their first doses. President Donald Trump tweeted that he was not scheduled to take the vaccine but looked “forward to doing so at the appropriate time.”

“I think it’s imperative for our state leadership to take the vaccine and most importantly to instill confidence,” he said.

Justice has said West Virginia does not expect to receive enough doses in the initial few weeks of rollout to fully cover the over 100,000 people who work in health care, live or work in long-term care centers, or are first responders and public health officials.

“We’re going to move at light speed to get you vaccinated,” Justice said, urging people to keep wearing masks.

West Virginia has struggled to stem outbreaks even as the severity of the virus’s spread has forced most counties to close schools and youth sports. The number of people hospitalized for the virus in West Virginia hit a record 720 on Sunday, more than double the number from a month earlier.

A record 130 people died from the virus last week in West Virginia, up 15.5% from the previous week. The state’s number of total deaths, 978, has doubled since early November.

The virus is confirmed to have infected at least 53,741 people in the state and killed 978.

Justice has rejected the idea of closing down businesses even as mask-wearing and testing has not controlled virus spread. He announced the state is now hoping to test all college students once a week.

Doses were first shipped to Kanawha and Monongalia counties and are expected to reach Berkeley, Cabell and Greenbrier counties on Tuesday.

Frozen vials of the vaccine made by Pfizer Inc. and its German partner BioNTech continue to be shipped this week. West Virginia expects to receive tens of thousands of doses a week initially, ramping up in the future as Moderna looks to gain federal emergency use authorization for another vaccine in the days ahead.

On Tuesday, the number of Lawrence Countians who have tested positive for COVID-19 broke 3,000. The total number was 3,020,... read more