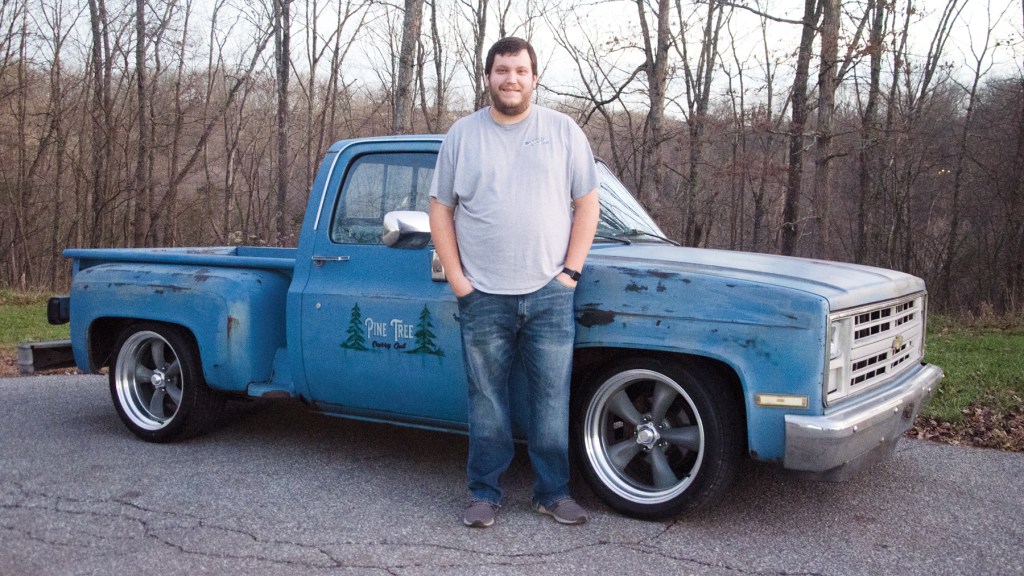 Corey Heaberlin, of Catlettsburg, stands next to the 1987 Chevrolet C10 truck that belonged to his grandfather, Lawrence Harper, of Pedro. Haeberlin recently got the truck running and restored to the condition it was in when Harper passed away in 1987. (The Ironton Tribune | Heath Harrison) 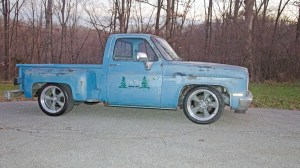 The truck features the logo of the Pine Tree Carryout, which burnt down earlier this year. The business was a favorite hangout for Lawrence Harper, of Pedro. (The Ironton Tribune | Heath Harrison)

Restored truck serves as memorial to Pedro man, as well as local landmark

CATLETTSBURG, Ky. —Corey Heaberlin has many vehicles at his home and said he’s been through 60 of them at the age of 30, but there’s one that he says stands above the others.

He is referring to the blue 1987 Chevrolet C10 pickup in his garage, which previously belonged to his maternal grandfather, Lawrence Harper, a lifelong resident of Pedro.

In 2008, Harper had a stroke in the parking lot of Pine Tree Carryout near his home and died shortly after.

Due to paralysis, he was never able to drive again after going to the Pine Tree, a favorite hangout of he and his friends, where he made the pickled eggs that were sold there.

After Harper’s stroke, the truck sat in the driveway of his mother, Cindy Wright, for several years, before being given to Heaberlin.

“Corey had always hoped to be able to refurbish the truck but keeping the originality and character,” she said. 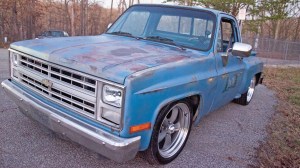 The truck, belonging to Lawrence Harper, of Pedro, sat in the driveway of his daughter for many years following his passing, until it was given his grandson, Corey Heaberlin, who restored it and got it running again. (The Ironton Tribune | Heath Harrison)

Heaberlin said the opportunity came earlier this year, when he was furloughed and he and his friend, Aaron Hall, began the project.

“He did the majority of the help,” Heaberlin said.

When he received the truck, it was no longer running.

“All the rockers were rusted,” Heaberlin said. “It had been sitting 10 years.”

In addition to rebuilding the motor, they replaced its suspension, lights, carpet and installed new floor pans.

“You could see the road beneath,” he said of the state the underside was in. 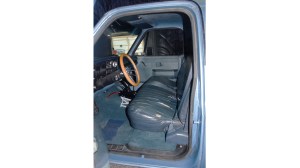 Corey Haeberlin installed new carpet and floorboards in the interior of the 1987 Chevrolet C10 truck that belonged to his grandfather, Lawrence Harper, of Pedro. (The Ironton Tribune | Heath Harrison)

Altogether, they put in 150 hours of work.

For the exterior, he said he wanted to keep its lived-in look, “I wanted it to look like it did when Pa-Paw had it,” Heaberlin said. “I didn’t want it to be a show truck.”

He had Tracy McKenzie, of South Point, from Extreme Airbrush do the painting on the body to simulate rust and aging.

McKenzie also did another special addition, adding the logo of the Pine Tree to the doors, for which Heaberlin asked the business’s owners for permission.

“It had special meaning,” he said. “It was the last trip he made.”

Wright said the Pine Tree owners have since contacted her son, offering him the metal sign for their business, which burned down earlier this year.

“They don’t plan to reopen,” she said.

Finally, on the glass of the back of the cab, they added a sticker with the name,” Harpo,” which his grandfather went by.

Once it was restored, Heaberlin showed the truck to his mother, and his grandmother, Betty Harper, 87, of Pedro, who hadn’t seen it running in years.

“It was a tearful surprise!” Wright said of her mother’s reaction.

Heaberlin said the restoration was a great project for him and Hall.
“Everything’s that could be new on it is,” he said of the extensive work. “We wanted it to last.”