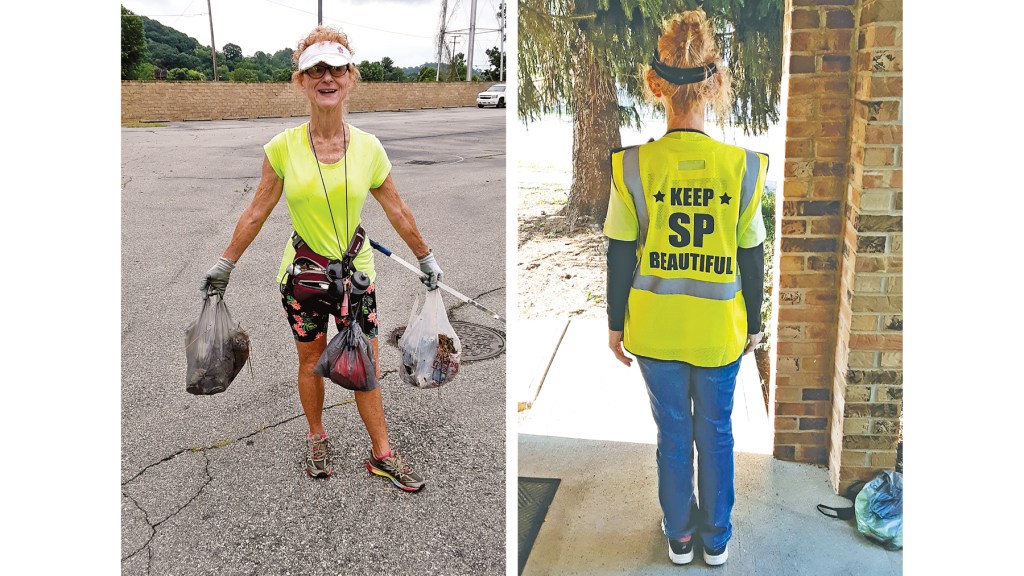 Sharon Poston, in photos from early this year, shows off the gear she carries with her as she walks around South Point and picks up litter. (Submitted photo)

It’s a rare day when Sharon Poston isn’t walking the roads of South Point on her mission of picking up litter from the side of the roads.

Clad in a neon green safety vest that reads “KEEP SP BEAUTIFUL,” Poston is a one-woman clean-up crew who makes her daily rounds taking care of what she calls an embarrassment.

She was originally from Huntington, West Virginia, but moved to Cincinnati after she got her dental hygienist degree from Shawnee State University in 1997 at the age of 49.

She moved to Flatwoods, Kentucky after retiring to be close to her son and then, two years ago, she moved to South Point to an apartment near Jerry’s Lake. She chose the apartment because she wanted to be in nature.

“And I’m a walker and I thought I would enjoy walking around the lake,” Poston said. But she hated seeing the litter that people tossed on the ground, instead of putting it in the available trash can, so she started packing a garbage bag.

“I thought I might as well be picking up the litter while I walk around and keep the lake looking nice,” she said.Then, once fall came and the plants died, more litter became visible on the hillsides.

“Let me tell you, it was bad,” Poston said. So the 72-year-old starting cleaning the hills too.

Then in the spring, the creek flooded the path around the lake so Poston started walking on County Road 1 and saw what a mess that was.

She especially hated the intersection of County Road 1 and U.S. 52.

“It was a blanket of garbage on either side of the road,” Poston said. “It was so bad, such an eyesore.”

She took to taking a different route home, just so she didn’t have to see it.

“It was embarrassing, it was like we lived in a dump,” she said.

Eventually, she couldn’t take it anymore and made it her project to clean it up. She gathered so much that she asked local businesses for permission to put the bags of trash in their dumpsters.
“I took a whole day and did one side. Then I spent the next day and did the other side,” Poston said.

She found other intersections that were just as bad and spent days cleaning those up too.

At one hilly spot, she spent seven hours a day for a week and filled up 23 bags with litter.

Sometimes, she encountered items that were too big for a bag, like a waterlogged cooler that weighed a lot that she dragged out of a creek, which was quite the task since she only weighs 110 pounds.

“I found a water hose and wrapped it around the handle and pulled it up from the creek,” Poston said, finding the situation kind of funny because it reminded her of those TV shows where the people try to lose a bunch of weight and do stuff like running through an obstacle course. “I told one lady that I weighed 300 pounds before I started this.”

And Poston’s efforts haven’t gone unnoticed.She said she has had people stop and compliment her. Others try to give her money but she refused until her cousin insisted she take it.

“She said ‘Don’t take their blessing away from them’” Poston said. So, the next time someone offered up money because he appreciated her hard work, she took the cash and donated it to her church.

Stephanie Helms, the interim director, of the Lawrence-Scioto Solid Waste District, said the office has gotten a lot of positive calls about Poston and her work.

“She’s out almost every day picking up trash,” Helms said.

Even the cold weather doesn’t slow Poston down.

“I said ‘I know you probably won’t be doing as much with the weather getting colder’ and she said ‘Well, I have a coat!’” Helms said, with a laugh.

And the solid waste district has been supplying Poston with garbage bags, gloves and a litter grabber to help her out.

“I hope others are encouraged by her efforts, picking up even one bag of litter seems like such a simple task, but has a huge impact,” Helms said. “I am hopeful that seeing her hard work and efforts will deter others from littering or even better motivate others to do the same.”

Poston said she would like to see others join in cleanups.

“I have a friend in Proctorville and he told me that people in his neighborhood, they will get together and go out and clean up the neighborhood,” she said. “I wish more people would do that.

I think people should be encouraged to do that. We are all shut in because of the pandemic, our social life in very limited. So why not get out and do something like this?”

Others interested in such efforts can receive supplies from the solid waste district by calling the office at (740) 532-1231.