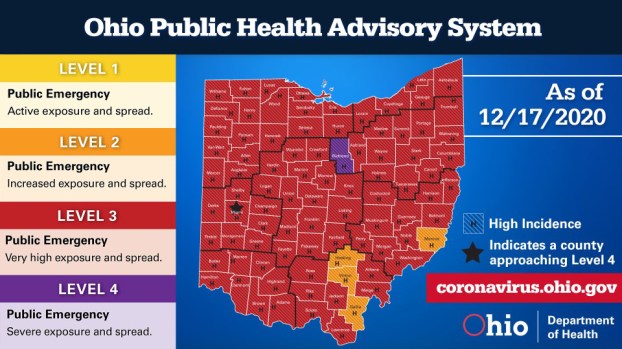 COLUMBUS — While the number of purple counties dropped to one this week, the bulk of Ohio remains at Red Level Three on the state’s update of its COVID-19 alert map, released on Thursday.

Richland was the sole county continuing at the most severe designation on the four-tier system, while four counties, Gallia, Vinton, Hocking and Monroe, were listed at Orange Level Two. No counties were at the lowest alert, Yellow Level One, and 83 of the state’s 88 counties were at Red Level Three.

Lawrence County was listed at Red Level Three for the eleventh week in a row, its second stint at the designation since the system was implemented in the summer.

DeWine said every county in Ohio is at three times what the U.S. Centers for Disease Control consider to be high incidence for the virus.

DeWine also said that schools in Ohio have been pulling back on in-person learning as the pandemic worsens across the nation.

“We’re seeing more schools that were open five days a week start to pull back because of the spread of COVID-19 in the community,” he said.

Staff report The Rock Hill Local School District is inviting the public out for a second night to view its... read more