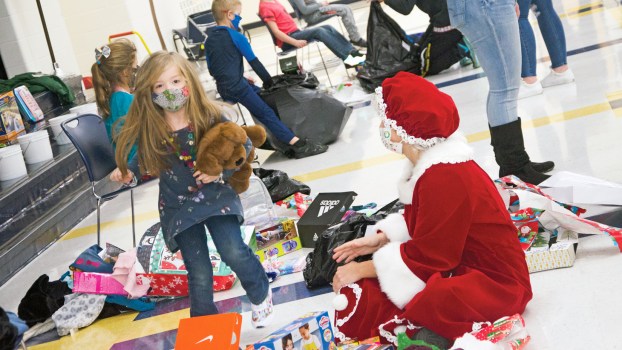 Savanna Soward, of Burlington Elementary School, dances in the new shoes she received among her gifts, as Mrs. Claus, portrayed by Sarah Roach, of South Point High School, watches at the Christmas party organized by the high school students on Wednesday. (The Ironton Tribune | Heath Harrison) 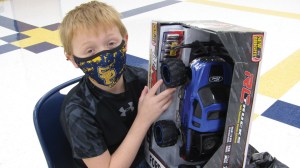 SPHS students host Christmas event for those in need

BURLINGTON — The holiday season may be mired in the dark winter of the COVID-19 pandemic, but that did not stop South Point High School students from making things brighter for many on Wednesday.

As they do each year, a group of honors students and members of the school’s student council hosted an event for those in need at the district’s two elementary schools.

It was part of the annual Christmas project for Rho Kappa history honors students and members of the school’s student council. 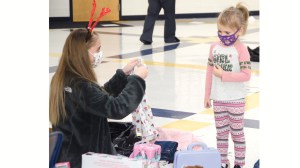 Typically, the students take a group of children from Burlington and South Point elementary schools shopping for clothes, followed by a large pizza party at the South Point Community Center, where they are given the toys that are on their wish list.

Due to the pandemic, that was not possible this year, but the project was not deterred.

On Wednesday, the high school students visited both of the elementary schools — South Point in the morning and Burlington in the afternoon, where 13 children, wearing masks, at each school were taken to the cafeteria and spaced out in chairs five feet apart.

It was then that Santa and Mrs. Claus arrived, bringing a bag of gifts for each child, which were distributed by the high school students, all of whom were wearing masks. 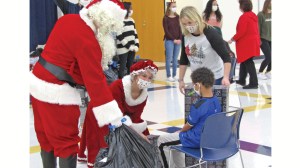 “It’s a socially-distanced visit from Santa,” Kent Stewart, a history teacher at the high school, who has overseen the project since 2009, said.

The children, from kindergarten through fifth grade, were chosen from families who might need some extra help for the holiday season. The bags contained clothing, including new shoes for many of them, as well as coats and winter items, other necessities and toys the children had asked for.

Stewart said the project has been taking place for about 15 years. In past years, members of the Mu Alpha Theta honors group have also taken part.

Many of the high school students were taking part in the project for their second year, such as senior Shelby Powell, who is a member of both student council and Rho Kappa.

“I really enjoy seeing the kids’ faces as they opened their presents and seeing the joy they have,” Powell said.

She said it made her fell good to offer help to the families.

“Not everybody is as fortunate as others,” she said.

Also in her second year with the project was Megan Epperly, a senior and member of Rho Kappa and student council.

“It’s really nice, knowing you’re helping to give someone a better Christmas,” she said.

Chloe Walter, a senior with Rho Kappa, said she enjoyed her second year with the project.

“I really love to get to do this and see the joy from the kids,” she said. 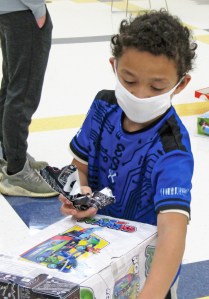 Walter said, in past years, the groups have done things such as selling candy to raise money for the event.

This year, they received several private donations, such as from Cindy Chinn and Big Sandy Superstore, as well as a $2,000 Big Cover Up grant from United Way of the River Cities and Advantage Toyota.

The grants were awarded to student organization projects for which members raised funds to buy winter clothes and needed items for other students.

Portraying Mrs. Claus for her second year with the South Point project was Sarah Roach, a senior and member of Rho Kappa and student council, who described the day as “heartwarming.”

“More than anything, I enjoy seeing little kids happy,” she said. “Getting to watch the sweet faces of those kids light up as they were opening their presents warmed my heart so much.”

Roach said the reason she joined the Christmas project was “to make an impact on people’s lives.”

“This has been a crazy year and I hope that, today, these kids start to realize that there still is some good in the world,” she said. “I can’t wait to see this program continue to grow each year and impact the lives of more and more kids in the future.”

Following the event in the cafeteria, Roach, in her costume and accompanied by Santa, visited classrooms in both schools, starting with the preschool students, where they distributed candy canes. 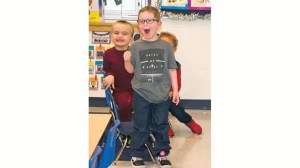 Students in Burlington Elementary School’s preschool react in surprise as Santa and Mrs. Claus show up in their classroom on Wednesday. (The Ironton Tribune | Heath Harrison)

Elaysia D. Wilburn, a junior, explained her involvement with the event and its organizing.

“I got involved in the Christmas project because I believe it’s a way to not only get involved with my community, but to also give to little ones that may not have the best Christmas at home,” she said. “Seeing their faces light up taught me that Christmas isn’t about the gifts — it’s about sharing love between one another and being able to come together just to make someone smile in crazy, hard times like now. Those smiles are the reason we do projects like these.”

Staff report The Rock Hill Local School District is inviting the public out for a second night to view its... read more