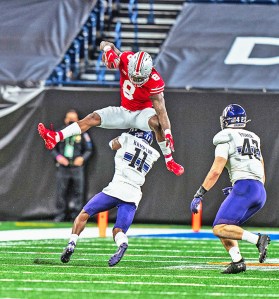 INDIANAPOLIS (AP) — Ohio State running back Trey Sermon got the message Saturday.
He’d heard coach Ryan Day preach about everything the Buckeyes overcame to reach this season’s Big Ten championship game. He also heard Day urging players to overcome more obstacles in the second half.
So Sermon delivered — with a record-breaking performance.
He ran for 331 yards and scored two second-half touchdowns, helping No. 3 Ohio State rally past No. 15 Northwestern 22-10 for its fourth straight conference crown and a likely spot in the College Football Playoff.
“I’m aware of my ability and I know I’m more than capable of playing my game, which is making guys miss and playing at the second level,” the Big Ten championship game MVP said. “When I’m in the zone, I feel like the game just really slows down and I can see everything develop, make the right reads and make the right cuts.”
Sermon used the combination of vision and speed to average 11.4 yards on 29 carries against one of the nation’s top defenses, breaking Eddie George’s single-game school record and the Big Ten championship game mark.
The former Oklahoma back did it all when the Buckeyes (6-0) needed him most, too.
Quarterback Justin Fields said he couldn’t throw the ball late in the game because of a sprained right thumb. Starting running back Master Teague left in the first half with an undisclosed injury, and star receiver Chris Olave was inactive and didn’t make the trip.
With Ohio State struggling and down 10-6 at halftime, it had a familiar feel to Day.
“This game was a microcosm of what this whole season has been,” Day said. “These guys, they’ve been gritty, they’re tough. They’ve been through so much and they just don’t flinch.”
For Northwestern (6-2) it was agonizing.
The Wildcats led from the moment Cam Porter scored on a 9-yard with 4:03 left in the first quarter until the moment Sermon answered with a 9-yard run to give the Buckeyes a 13-10 lead with 2:41 left in the third.
In between, Northwestern settled for a field goal on one drive and blew another scoring chance when Peyton Ramsey was picked off in the end zone to open the second half.
Ramsey was 24 of 37 with 224 yards and ran effectively, too. But he threw two interceptions and lost a fumble — all in the final two quarters.
“I’m just hurting for our seniors,” coach Pat Fitzgerald said. “We didn’t come down here to play hard, we came down here to win, and not to get the job done is bitterly disappointing.”
Ohio State added a 26-yard field goal early in the fourth quarter, and Sermon, fittingly, sealed the win with a 3-yard scoring run with 4:03 to go.
“We wanted to throw early, wear them out and run in the second half,” Day said. “That’s how it kind of played out.”
THE TAKEAWAY
Northwestern: For the second time in three years, the Wildcats played better than most expected in the title game. But again Northwestern wore down late and went home as the runner-up.
Ohio State: League officials waived the six-game eligibility requirement and the Buckeyes took full advantage of their chance. They didn’t earn many style points, but they are undefeated.
POLL IMPLICATIONS
Northwestern: The Wildcats may slide in the polls but this loss shouldn’t hurt their bowl resume much.
Ohio State: Whatever happens in the polls this week, the Buckeyes really only care about one thing — making the playoff.
COMMITTEE QUESTIONS
The CFP selection committee might want some answers from Ohio State before releasing the brackets Sunday.
Ohio State had nearly two dozen players on its inactive list for the second straight game and Olave wasn’t the only big name missing. Linebacker Baron Browning, defensive end Tyler Friday and punter Drue Chrisman were inactive, too.
Day said only “a few” of Saturday’s inactives might have to sit out the mandated 21 days for testing positive for COVID-19.
Starting safety Marcus Hooker didn’t dress, either. And injuries to Fields and Teague could further complicate matters.
Fitzgerald still believes the Buckeyes belong.
“No. 1, they’re undefeated,” he said. “No. 2, they have an incredibly talented team. They’ve overcome a bunch of adversity through COVID and run the gamut of the Big Ten season. With the ups and downs, I don’t think everyone understands the emotion that goes into the challenges they’ve been through.”
FAMILIES FIRST
Day said he supported the lobbying efforts of Notre Dame coach Brian Kelly and Clemson coach Dabo Sweeney to allow players’ families at playoff games, though he acknowledged he hadn’t given it or the logistics much thought this week.
“I did see the comments that were made and I also agree that families need to be there,” Day said. “These guys have been away from their families for a long time.”
UP NEXT
Northwestern: Will find out Sunday where its headed for bowl season.
Ohio State: Must wait to see if it will be included in the national championship shootout.

HUNTINGTON, W.Va. (AP) — Trea Shropshire had five receptions for 180 yards — including a 71-yard touchdown in the fourth... read more