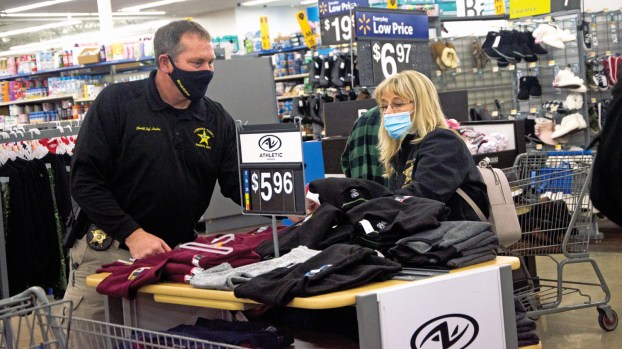 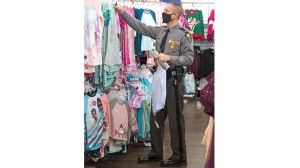 SOUTH POINT — Each year, Lawrence County Shop-With-Cop takes place at the South Point Walmart, with members of law enforcement taking a group of children in need into the store to buy them clothing, bedding, toys and other items.

Afterward, the group, comprised of children and their family members, is usually treated to a Christmas dinner at Ponderosa and a visit with Santa.

But 2020 is not a typical year and, because of the COVID-19 pandemic, plans had to change this year.

On Tuesday, officers and deputies were on hand at store, where they took lists from the families and purchased items for them.
Altogether, they were shopping for 28 children, Trooper Malone, of the Ohio State Highway Patrol, said.

Organizers had feared the event might not be possible this year, due to the pandemic, but thanks to private donations, they were able to pull it off.

Sheriff Jeff Lawless said they had about $200 to spend on each child and that his office, the Highway Patrol, the Coal Grove Police Department and Ironton Municipal Court took part in the event.

It was a smaller group than usual, but he said they would go through the store with the lists of the children’s clothing sizes, necessities and desired toys.

In addition to the gifts, the families would also receive a food basket, Lawless said.

The aim of the event is not just to provide for the children, but to also give them a positive interaction with law enforcement.

As the officers shopped, a few customers in the store approached them and thanked them for the effort and for their service to the community.

“We’re thankful for all you do,” one woman said.

Malone said the children are referred to them from the schools, as well as through officers who have encountered them in their work.

Despite the situation this year, he said they were glad they could offer help.

“We are tickled we were able to do it,” he said. 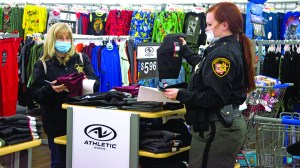