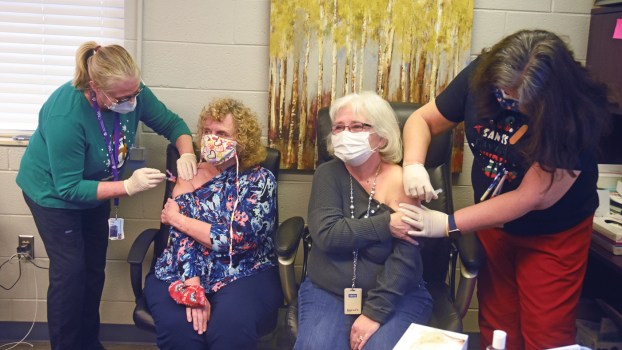 Lawrence County Health Department director Georgia Dillon, left and nurse Debbie Fisher, public information officer for the department, receive the first two shots of the COVID-19 vaccine to be administered in the county on Tuesday. Vaccines were given to 11 workers at the department, who will go on to administer it throughout the county. (The Ironton Tribune | Heath Harrison)

“Hopefully, we can see the light at the end of the tunnel now,” Debbie Fisher, nurse and public information officer for the Lawrence County Health Department said on Tuesday, shortly before she was one of the first in the county to receive the COVID-19 vaccine.

The health department received a shipment of the Moderna vaccine earlier in the morning and in the afternoon, 11 staff members were given the first of the two needed shots.

Fisher, along with health department director Georgia Dillon, were the first in the group to take the vaccine.

Sitting next to each other in chairs, they received the shot after staff members counted down and filmed the event.

Following them, the rest of the group received the shots in pairs.

No ill effects were noted, though Fisher said people should be watched for 15 minutes after receiving the shot.

After getting their shots, staff members were given card that they could fill out and carry with them to show they received the vaccine.

Fisher said the vaccine came from the Ohio Department of Health and those who receive it will take a second shot in 28 days.

She said the department’s staff were vaccinated so they will be protected as they then go out and administer it to others in the county in phases.

The first, Phase 1A, will include first responders, as well as those in congregate settings like nursing homes.

Fisher noted that most nursing homes in the county have partnered with CVS and Walmart and will receive the vaccine through them.

While the health department shots were the first to be administered in the county, one resident announced last week that he had received the vaccine.

Lawrence County Commissioner Colton Copley received the vaccine as part of his job as an emergency room doctor at Cabell Huntington Hospital in Huntington, West Virginia.

“Today, as a frontline Physician, I received my COVID-19 vaccine,” Copley posted on Facebook on Dec. 16. “Vaccines have saved countless lives throughout history and I am confident this vaccine will help bring an end to this terrible pandemic.”

Vaccines will be rolled out in phases, with elderly and vulnerable populations following frontline workers. It is expected to be widely available to all of the public by spring.

As the vaccines begin to be distributed, many political leaders have taken the shot in public, to assure the public on its safety.