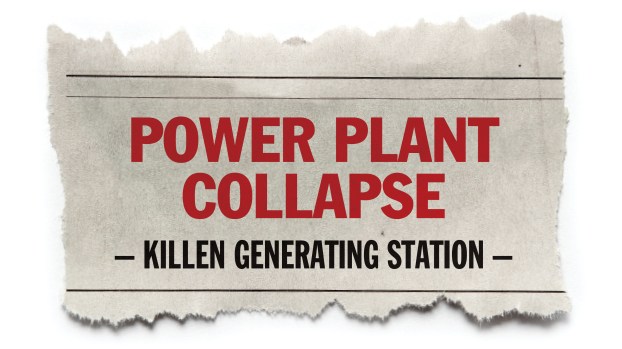 MANCHESTER (AP) — The demolition company that lost workers in a southern Ohio power plant collapse said Monday recovery efforts for the last one will continue into next month.
Patrick Crowley, a spokesman for the Detroit-based Adamo Group, said recovery work is expected to be complete in mid-to-late January. He said in a statement that the company is taking direction from the U.S. Occupational Safety and Health Administration in recovery efforts and is cooperating fully with efforts to determine the cause of the Dec. 9 collapse.
The missing man has been identified as Jamie Fitzgerald, who was from Boyd County,
The company has retained New York-based engineering firm Thornton Tomasetti to assist recovery efforts. Three workers at the site survived, while two were lost.
A worker whose body was found in rubble was identified earlier as a 42-year-old northeastern Kentucky man, Doug Gray of Greenup County.
Another man remains unrecovered from the Killen Generating Station site.
It’s not known what caused the collapse of the power plant, which was set to be demolished. The coal-fired generating station opened in 1982 and closed in May 2018. It is located some 75 miles east of Cincinnati.