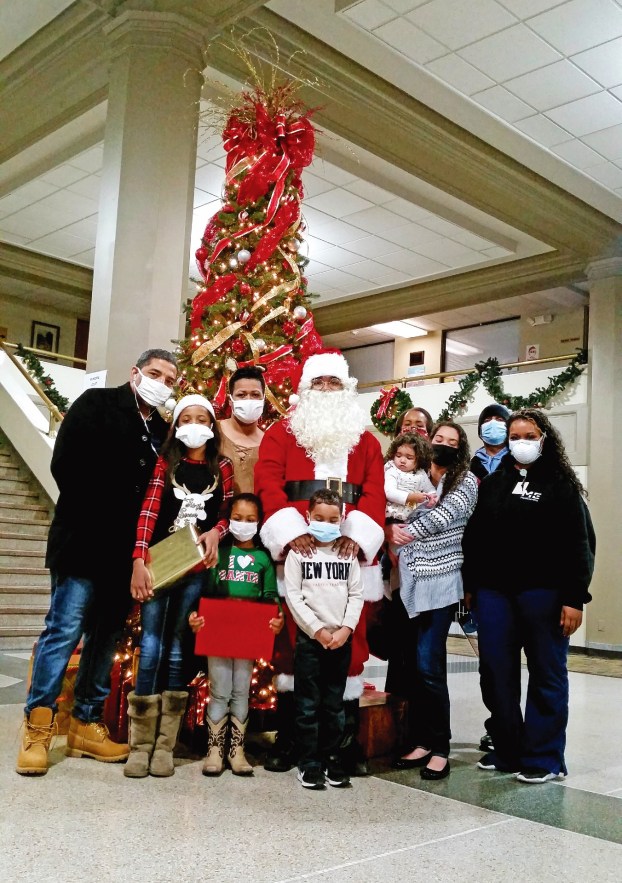 On Saturday, members of the Brown and Crockel families gave out presents to kids as part of the family’s Sis’s Angels event, named after Clara “Sis” Brown, whose favorite time of the year was Christmas. From left, in front are Kinzlee Crockel and Kingston Crockel, in the middle row are Tiyeh Brown, Kierston Crockel, Santa Claus (John David Crockel Jr.), Chantlee Crockel, Megan Crockel, and in the back row are Peter Richardson, Monique Brown, Janet Crockel and John Crockel. (The Ironton Tribune | Mark Shaffer)

It began as a simple way to honor the family matriarch Clara “Sis” Brown.

“Christmas was her favorite time of year,” said Janet Crockrel, Browns’ daughter. “After she passed away, my sister Monique Brown, my brother, Warren Brown Jr., we all got together and decided to do what we called Sis’ Angel Tree, where we give gifts to kids in the Ashland-Ironton area.”

The first year, they helped a few kids, but it has grown to dozens this year.

They put up a post about the event on Facebook and then “angels” who anonymously buy gifts for 30 or kids every year.

“We have some angels that have been with us for six years, they have donated from day one,” Crockrel said. “And we could not do this without our angels. We can’t name names of angels, because that is exactly what they are, angels.”

The Crockrel and Brown family members set up at the Ironton City Center. Usually, it is a much bigger event with a small party and a visit from Santa Claus, but with the pandemic, they still had the event but it was different.

“Usually, Santa is set up by the Christmas tree, talking to the kids,” Crockrel said.

Instead of a party, they brought the gifts out to the waiting families. Santa had to stay behind the glass at the entrance so he could still wave at the kids.

“But they still get a treat from Santa,” Crockrel said. “This way, there is no contact and the kids still get their stuff from Santa.”

And did Crockrel think that her mother would like the event?

“She is looking down on us and she is so happy,” she said. “Christmas was her favorite time and I know she is so proud of this.”

And what is Crockrel’s favorite Christmas memory of her mother?

Well, a story Crockrel has always told her kids it that she had just started kindergarten and some of her new classmates didn’t believe in Santa Claus.

“I started telling my mom I didn’t believe,” Crockrel said. “Christmas Eve, I was sitting on the couch and there came a knock at the door. She told me to go answer the door. I went and there at the door was Mr. and Mrs. Claus. I believed after that.”

To donate to Sis’s Angels, go to paypal.me/pools/c/8vjtJHfYAl.