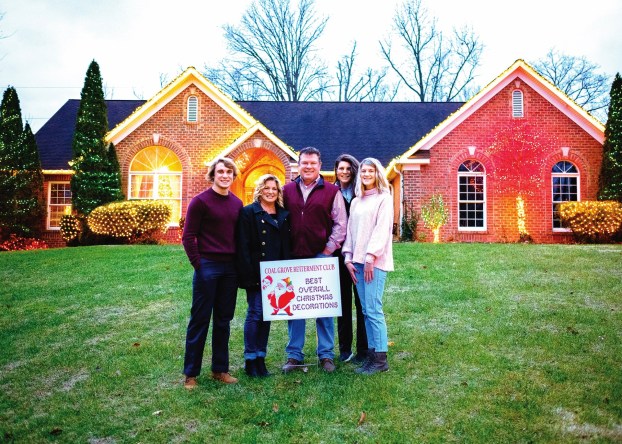 The Holmes family were named as Best Overall winners in the Christmas lights display contest by the Coal Grove Betterment Club. (The Ironton Tribune | Jeremy Holtzapfel)

On Tuesday, the Holmes family, who live at 137 Brammer Dr., were presented with a sign for their effort.

She said the lights were put up by her husband, Eric, and son, Evan.

She said she came up with the ideas she wanted and they went to work.

“We rented a ladder to decorate,” she said.

The display involved decorating the house in red, white and green, as well as several pine trees.

Jami said they did not have inflatables or any extraneous items, keeping things focused on the colors.

The Holmes family also includes two daughters, Ellie, who attends the middle school, and Tori, who recently moved out.

Entries were judged by members of the Betterment Club and Sherman said there were 130 houses to look at, far more than they expected.

“It was a big hit,” he said. He is hoping that they can repeat the contest next year.

“With COVID, the Betterment Club was bummed out because everything we planned has been canceled,” he said. “And one of our members came up with the idea ‘Why don’t we have a light show?’ I’ll be darned if it didn’t blow up.”

Sherman said other winners were the Griswold Award, given to Matt Matney, and there was a tie for Most Creative, between Scott Case and Jamie Littlejohn.

The Betterment Club was founded in the 1970s, inspired by the good deeds of Jay Roush, and typically hosts events such as Breakfast with Santa and the Family Fun Days in the summer, as well as volunteer projects and providing scholarships to local students.

Health department staff receive shot, will administer to first phase in county “Hopefully, we can see the light at the... read more