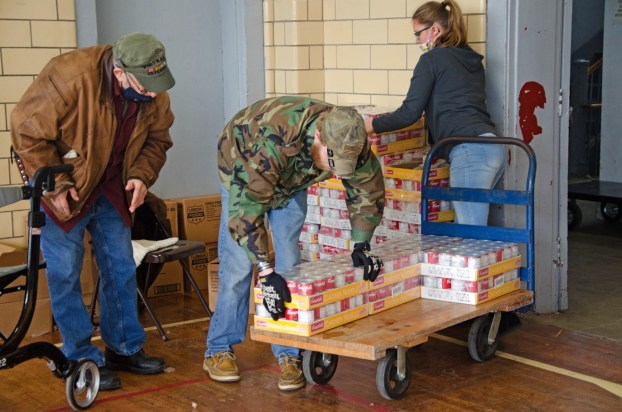 CHESAPEAKE — When the annual Christmas giveaway by the Chesapeake Community Mission Outreach began on Monday morning, cars were lined up a good ways from the village’s community center, Darlene Green, who runs the adjacent senior center said.

“They were as far away as Pickett’s Concrete,” she said of the business further down Rockwood Avenue, which she passed around 9 a.m..

And for the next five hours, volunteers with the CMO loaded shopping carts with fruit, meat and other food items to provide for families in need, wheeling them out to cars that drove through the lane behind the community center.

Those receiving food had registered with the organization in advance and were in their system for the regular monthly giveaways of food items, Danny Newman finance secretary for the group, said.

He said there was small increase in the number of people served for the Christmas giveaway this year.

At hour four, they had served 433 people, with more to come.

Newman said while there was not a large spike in the Christmas sign-ups, the group’s monthly giveaways have seen a surge in registrations during the COVID-19 pandemic.

In addition to the food distribution, the CMO also had a room full of donated new toys for families to choose from for their children.

Newman said the group wanted to especially thank Nicely Towing, who donated a large amount of potatoes for the event, and United Dairy, who provided milk.

Newman said they had help on Monday and in the preparation over the weekend from a local troop of Boy Scouts, as well members of a basketball team from Fairland schools.

Newman said volunteers planned to be on hand again on Tuesday, to distribute more items to those who did not make the big event.