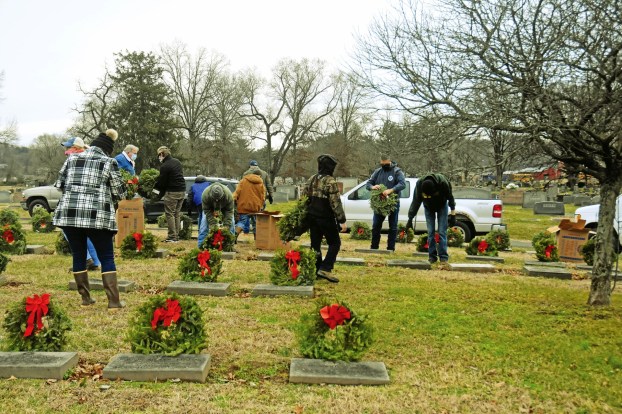 On Saturday, a crowd gathered to honor the fallen by putting a wreath by every veteran’s headstone in Woodland Cemetery as part of the local Wreaths Across America event. (The Ironton Tribune | Mark Shaffer)

On Saturday, roughly 100 people gathered at Soldiers Plot in Woodland Cemetery to place evergreen wreaths on the graves of those who served America in the military.

The tradition started in Lawrence County in 2012 after local organizers Juanita Southers and Linda Dalton saw the Wreaths Across America ceremony at Arlington Cemetery.

Last year, Laura Brown and her sister, Sally Ingles, took over coordinating the event from Dalton and Southers, who passed away in July 2019.

“It was absolutely amazing this year, with all the wreaths on it,” Brown said.

Back in September, Brown was concerned that because of the pandemic, they wouldn’t be able to raise enough funds to cover all 1,110 veterans’ graves, but they did, thanks to support from the community.

“With generous donations from people, they have been so absolutely generous with getting a wreath for every veterans’ headstone. People chipped in and were very generous. The whole community came together for this” Brown said.  “And it is the second year in a row.”

It was Dalton’s dream to have enough wreaths for every headstone, which was achieved for the first time in 2019. Most years, they were only able to raise enough funds for 600-800 wreaths and they were placed in between headstones.

“I think Juanita would be ecstatic that we’ve gotten enough for every headstone two years in a row,” Brown said. “This was hers and Linda’s baby. I know that she is up there rejoicing.”

Brown said their goal next year is to raise enough funds to get enough wreaths for the Civil War section of the cemetery, too.

“That’s another 124 wreaths,” Brown said. “We were able to put a couple over there this year, but maybe next year, we are hoping to fundraise enough.”

Brown said she and her sister were happy to help coordinate the event because of a long family tradition of serving.